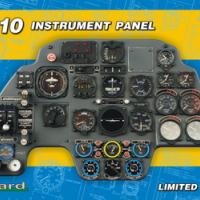 Should you be looking for a little something different to build, I would like to point you in the direction of this one-quarter scale instrument panel that is being offered as a Limited Edition release by the folks at Eduard. The kit assembles with relative ease, and is a good representation of the instrument panel used in the Messerschmitt Bf-110C variant, although the variant is only mentioned once on the side of the box. The needles used in the various gauges are the only tricky items to handle during construction, so this would be a good item for modelers fourteen and up, as the box recommends.

Upon opening this kit, the builder will find a one-piece instrument panel along with ninety-nine parts spread across two sprues, all made of a medium gray plastic. In addition, there are two sprues that hold twenty-eight clear parts, two photo-etch frets holding a total of sixty-one parts, and a decal sheet with forty-one items. The instructions are contained in an eight-page manual printed in color on glossy paper.

I happened to purchase one of these control panels when they were first advertised in the flyer for a mail order hobby shop that I frequently use. The original issue is different in that there were no decals included as the instrument parts were all photo-etched. The instructions were on flat (non-glossy) paper, and were in black-and-white print only. The instructions were also loosely folded together, as the newer release is stapled at the binding edge. The box also changed as the original had only black bezels, while the new one added some color with blue and yellow bezels on some instruments.

I typically write a little about the history of what I am modeling, but will instead spell out the instruments that are on the panel, as they are not spelled out on the direction sheet. I used my copy of the Monogram book German Aircraft Interiors 1935 – 1945 Volume 1 as my reference for the information that follows. Starting at the top and left and working across and then down are the red and white knob that translates to “heading turn” and “not triggering” for the wording (this item is not labeled in my reference book). Next is a small panel with four red and four clear lights with an on and off switch that I believe is the machine gun cocking switch and indicating lights (this also is not clearly labeled in my reference book). The AFN-2 Indicator is to the right of the indicator light panel, followed by a cover plate and then the Chronometer. The second row begins with the Undercarriage Indicator Lights, the Patin Repeater Compass, then the 2/4 gun selector switch above the ZVK-FF Control, the Coarse Indicator above the Slip Indicator, followed by the Variometer, and finally the two Propeller Pitch Indicators. Row three begins with the Propeller Pitch Change Levers with the Flap Controls (slightly above the levers) and Landing Gear Controls (slightly below the levers), followed by the Direction Finding Control, Altimeter, Artificial Horizon, and Pitot Heating above the Airspeed Indicator, then on the right are two Tachometers above two Manifold Pressure Gauges (on the slightly angled section of the panel). The bottom of the panel starts on the left with the Oil Pressure Gauge above the Emergency Gear and Flap Switches; in the center section are the Port Engine Coolant Temperature Gauge, Low Fuel Warning Lights, Dual Fuel Tank Contents Gauge, two more Low Fuel Warning Lights, and the Starboard Engine Coolant Temperature Gauge. The bottom of the center section of the panel contains the Radiator Flap Position Switch, Changeover Switch for the Fuel Gauge, and another Radiator Flap Position Switch.

In building my kit, I used Model Master Acryl paints, including RLM 66 Schwarzgrau, Aircraft Interior Black, RLM 24 Dunkelblau, Chrome Yellow, and Flat Clear Coat. I also utilized Tamiya Clear Red paint, and Future to get a glossy finish prior to adding the kit decals. The directions only mention the RLM 66, Clear Red, and Flat Black, but photos of the real panels show some instruments do have color on their bezels (yellow for Fuel and blue for Temperature). I decided to try something different during construction by opting to use GS Hypo Tube Cement to adhere most of the photo-etched items. This allowed me some ability to move items slightly if needed, and produced less of a mess than using a cyanoacrylate glue.

As far as my hits of this kit are concerned, the detail in all of the items is up to Eduard’s usual standards. All moldings were clean and crisp, requiring no clean up on my part. Assembly for most of the instruments consists of a decal base, an indicator needle, a clear face, and, finally, a bezel. There are a few variations, but all are similar. In addition, there were no fit issues with any of the items during assembly. I would also comment on the uniqueness of this release, as I was surprised to see the first issue in a series being for a Bf-110, but the original release coincided with the release of the Eduard Bf-110G. The second kit was recently released, and it is the instrument panel for a Bf-109E.

As far as my misses are concerned, each of the instruments on the main panel had a 6.20 mm raised injection spot that was about 1 mm tall. I used my Dremel tool to sand these flat, then used a sanding tool made for automotive work to clean these up, but the result was some marks that remained once the decals were installed. Fortunately, these marks disappeared with the “glass” installed. My other miss is that the propeller pitch switches are supposed to be movable, but once installed on the panel, the switches kept falling off. I ended up gluing mine in place. Not necessarily a miss, but I would have liked something identifying what the instruments and switches are, either in the individual assembly steps, or in a single drawing at the start or finish of the directions.

In conclusion, I would highly recommend this kit to modelers with an interest in World War II German aircraft, or others like myself who enjoy building a little bit of everything. This kit provided a nice break from some of my more typical builds, and as of a couple of days ago, my Bf-109E control panel in ¼ scale is on order.

Thanks to the folks at Eduard for providing this sample to the IPMS USA for review, to Steve Collins who runs the Review Corps for selecting me to appraise this kit, to the folks behind the scenes with the Review Corps who keep things running smoothly, and as always, to you for taking the time to read my comments.

Hand-held for scale
Previous Next