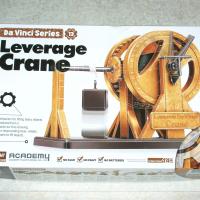 This is the latest in Academy’s “DaVinci Series”. They are models based on sketches of some of the inventions of this amazing man. All are molded in a vinyl-like soft plastic that facilitates the press fit of the components as no glue nor paint is required. All are ingeniously engineered to go together easily and to function smoothly.

The subject of this review is what is called a “leverage crane”. It is a system of levers, gears, wheels and ratchets that transfer linear energy into rotational energy driving a winding mechanism used to lift a heavy object, in this case a ball bearing incased in a plastic cube made to look like a large weight. There are 33 pieces, including a length of thread to tie the weight to the winding shaft. There is no flash and the parts are molded in two colors, black and brown. The black parts simulate those made out of metal it is to be supposed, as the brown ones have a nice woodgrain pattern molded into them. The instructions are of the international pictograph type and are quite well done with several detail sketch inserts to insure you get things correctly aligned. However, make sure you follow the order of assembly as to get something out of order might mean you cannot do a later step at all. I noticed something interesting about the instructions. In a previous review of a kit in this series, I mentioned that I had basically ruined my sample because I had “fixed” a part I did not want to force into place as it seemed too tight. As it turned out, it was supposed to be “too” tight as that is what made the whole thing work. Academy saw the review and nicely sent me some replacement parts without even being asked to rectify the problem. In the current kit, I noticed in several places in the instructions that “Tight Fit” is called out where you have to exert a little more pressure than normal. I don’t know if it was my comment that caused them to insert this or not, but whatever did, it was a good thing.

You may notice from the photos that I painted some of the parts in my kit. I put a dark brown wash on the “wood” parts to bring out the molded in woodgrain and it turned out quite convincing. I also painted the black parts a metallic grey with the exception of the inner boxlike structure. That looks like it would have been made out of wood in the real thing (even though the “real thing” never existed), so I textured it myself and painted it brown with a darker wash to make it look ‘woody’. Note, you do not need to paint this model at all. It looks quite nice all by itself. However, if you do, take care to avoid getting paint on moving surfaces or where parts join as tolerances are very close and you could gum up the works.

Actual assembly took only about 30 minutes. It snaps/slides together very nicely. When complete, it does function, although mine does so a little roughly. No doubt operator error somewhere along the line or perhaps some of the painting caused a problem, but it does work.

This was a fun model that builds up into a nice little display piece. If you’ve got an engineer in the family, it might make a great gift, assembled or not. Or, if you’ve got a budding engineer, it would be a good project for them. However, due to the intricacy of some of the functioning parts and the need to pay close attention to the instructions, I don’t’ think it’s a good kit for younger modelers. Teens and up I would say, although it could make a good project in a cub scout den or a parent/child project.

Thanks to Academy for providing the review sample and IPMS/USA for the chance to review it.