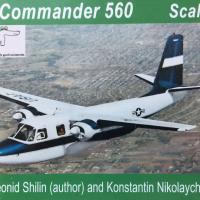 The Aero Commander line of medium twin-engine aircraft began with the Model 520 first flown in 1948. Designer Ted Smith used design cues from his work on the A-26 Invader in formulating the Aero Commanders layout. Known for stable handling characteristics and seating capacity, the Aero Commander proved its utility in service. The 560 series introduced more powerful engines and a swept vertical tail. In its later variants, the Commander would gain PT-6 turboprop power. Notable firsts for the type include the U S Air Force purchasing some designated L-26 or U-4 to carry President Eisenhower, the first medium twin authorized to carry the POTUS. Perhaps the most famous Aero Commanders were flown by the legendary Bob Hoover. His routine included full aerobatic maneuvers with two engines, one engine, and no engines!

This is my second excursion into Croco models and there are several similarities to the previous kit (see RU-8D review). Typical for this manufacturer, the kit comes in a plain cardboard box with a photo of an Aero Commander in US Air Force colors on the box lid. Inside are resin parts for the airframe, vacuform upper cabin section and windows and lenses for the landing lights in the nose. A single sheet two-sided instruction sheet and photograph reference depict three Aero Commanders on the decal sheet. This is a short run kit meaning there are no tabs or pins so the builder aligns everything. The castings are very nice with only a few pinholes to fill. Surface detail clarity varies from very fine too vague in some places. The corrugated surfaces on the flaps, ailerons, and tails surfaces are a bit overdone for my taste..

The cabin is fully outfitted with seats, instrument panel, and control columns. Try as I might, I couldn’t fit enough weight in front or elsewhere to keep it on its nose. As it turns out that was a problem on the real thing too. If you look at the photo of N146H, you'll see a prop under the tail to keep it from tail sitting. Take some time to identify the correct parts as this boxing includes castings for the Model 520 kit and there are differences. The main landing gear assemblies, upper cowling and faces, and the swept rudder are specific to the model 560. The fuselage required some sanding to flatten the mating surfaces. The vacuform upper cabin was the most difficult part of the build. It didn’t fit the contour of the fuselage opening and required multiple passes of putty, sand, prime, repeat to get it right. I have yet to figure out a way to keep the inside clear during the build. I did not use the vacuformed side windows electing instead to Micro Kristal Klear them. The wings and cowlings were next. The main gear assemblies are very detailed but getting them to fit into the cowlings proved difficult without some trimming of the support frames and the internal structure of the cowls. You must install the main gear assemblies before gluing the cowlings to the wings. The cowlings also required putty to close gaps in the joints.

I chose the civilian version registered N146H. The color I picked to match the photograph was Wimbledon White (8378), A Ford color in the Testors custom lacquer system. This system is a two-step color and clear top coat. I decanted the paint and applied it to the model with an airbrush. Then I made the mistake of grabbing the wrong top coat and when I sprayed it, an amber tint appeared on the surface! Already over the due date, I decided to live with it and that’s what you see in the pictures. Luckily, the decals proved to be very easy to use. While the stripes on the sheet didn’t exactly match the photograph, they conformed to very difficult surfaces with some Solvaset. This is only my third full resin kit so I am still learning my way around them. You’ll have to muster up your modeling skills, patience, and some courage if you’ve never done one of these. The reward is adding aircraft to your collection you can’t get any other way.

I came away from this build feeling much like the last one. Leonid Shilin and Konstantin Nikolaychuk are picking some unique civilian subjects and giving us modelers a great start at building them. I thank them for that and hope they continue to produce these wonderful kits. As always, thank you to Croco for the sample kit and to IPMS for letting me further my resin kits skills...