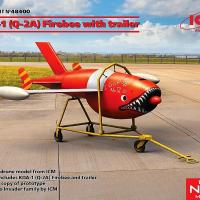 The Ryan Firebee is a series of target drones developed by the Ryan Aeronautical Company beginning in 1951. It was one of the first jet-propelled drones, and remains one of the most widely used target drones ever built.

The Firebee I was the result of a 1948 U.S. Air Force request and contract to Ryan for a jet-powered gunnery target. The first flight of the XQ-2 Firebee prototype took place in early 1951. The drone featured swept flight surfaces and a circular nose inlet. The initial models had distinctive "arrowhead" shaped end plates on the tailplane. The Firebee could be air-launched from a specially modified launch aircraft (Douglas A-26 Invader was first to be used for this), or ground-launched with a single RATO booster.

Following successful evaluation the target was ordered into production for the USAF as the Q-2A, powered by a Continental J69-T-19B turbojet engine with 1,060 pounds-force (4.7 kN) of thrust. The Air Force then obtained small numbers of a Q-2B with a more powerful engine for high-altitude performance.

The U,S, Navy bought the Firebee as the KDA-1 which was mostly similar to the Q-2A, differing mainly in its power plant: a Fairchild J44-R-20B turbojet with 1,000 lbf (4.4 kN) thrust. The KDA-1 and Q-2A could be distinguished by the KDA-1's protruding inlet center body and wider, steeply raked inlet. The U.S. Army also obtained a KDA-1 version designated the XM21 that differed only in minor details.

The Navy obtained several improved variants of the KDA-1, including the XKD-2 and XKD-3 which were not built in quantity, and the KDA-4, which was the main production version for the series. These variants were difficult to distinguish from the KDA-1, differing mainly in successively uprated J44 engines and other minor changes. [ Background information courtesy of Military Wiki.]

There are marking options for three different drones, one with the U.S. Air Force, the other two belonging to the Navy. One of the Navy drones sports a shark mouth and an appellation of “I Go Pogo VI”. Owing to the date of operation for these drones( early fifties) I assume that that is a reference to the comic strip Pogo, by Walt Kelly. Walt Kelly coined the phrase “We have meet the enemy and he is us!”

'Pogo was a daily comic strip that was created by cartoonist Walt Kelly and syndicated to American newspapers from 1948 until 1975. Set in the Okefenokee Swamp in the southeastern United States, Pogo followed the adventures of its funny animal characters, including the title character, an opossum. The strip was written for both children and adults, with layers of social and political satire targeted to the latter.' (via Wikipedia)

Assembly of the twenty-nine parts (six of which are for the trailer) begins with engine intake/exhaust trunk. ICM provides parts for the forward intake and would have you attach some of those parts (# A2 & A3) to the inside of each fuselage half. I found it easier to assembly those parts together and then place that assembly into the appropriate spot before closing up the two halves of the fuselage.

Although there are no suggestions for the interior of the intake/exhaust truck, there are color suggestions in the assembly instructions that are keyed to paints/finishes from ICM *, Revell, and Tamiya. In ICM's defense you can't really see that much of the inside of the exhaust trunk anyway. It is an exhaust trunk, so go with some 'exhausty-type' © colors of choice.

The two piece wings and single piece stabilizers are next and get inserted into the assembled main body of the drone. There is an additional part that shows molded on detail for the mounting faring and telemetry umbilical on the upper fuselage. [Technical Note: telemetry umbilical is a cool name for the electrical cable that was attached to the launching aircraft so they could send it on its way.]

Wing tip fuel tanks are added next as well as the rudder and the small wing lets on the horizontal stabilizers. The tip tanks are molded in upper and lower halves. If you choose the “I Go Pogo” scheme that split will aid in painting as the upper portion of those tanks are white whereas the lower portion is red. The only 'difficulty' I encountered with building or painting this beast was the white saddle across the upper fuselage. That 'difficulty' only amounted to masking off that area and then breaking out the airbrush.

I did have a minor problem with one of the decals. The decals are beautifully printed on thin carrier film, which was the problem. One of the “I Go Pogo' decals kinda folded over on itself as I was applying it (mis-applying might be a better phrase) and I just couldn't get it to unfold.

As noted earlier, the transport trailer consists of just six parts. All of which are easy to assemble, just make certain that the vertical support bits (part # B3 & # B4) are properly perpendicular to the main body of the trailer.

This KDA-1(Q-2A) Fire bee is a neat, little, off-the-wall kit that is fun to build and finish. The inclusion of the trailer makes it a breeze to display, adding to the its appeal. ICM does include an unused wing pylon with anti-sway braces for the drone. Which could give you the option of adding the drone to an existing aircraft already in your collection. Or, you can hold out for a pending release from ICM Holding of a 1/48th scale A-26 Invader launching aircraft with two Fire bee drones to be included with that release.

White on the Main Fuselage