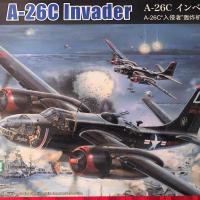 The A-26 is a lesser known twin engine bomber from World War II which got its ancestry from the A-20 Havoc. After World War II it was re-designated B-26 and also served in Korea. At first glance Hobby Boss’s 1/32 scale A-26C Invader is impressive.

The kit is molded in light gray plastic, with crystal clear transparencies and rubber tires. There are decals for two options, a night black Invader and a natural metal one. All parts were nicely wrapped in plastic but on my sample, the trim control wheel was badly damaged.

Assembly was straightforward and went fairly quickly. The kit recommends 150 gm of weight to keep it on its nose so I decided to use the cast-metal nose gear and wheel well from Scale Aircraft Conversions (Kit #32155), which supplied 42 gm of ballast. I filled the space between the wheel well and cockpit floor with lead, put lead in front of the instrument panel and also hid more lead under the nose platform behind the Norden bombsight, and the model still barely sits on its nose. I also modified the nose platform; as issued, it covered the bombsight, but looking at pictures, the Norden was shown exposed, so I cut the deck back one section.

All interior parts fit great until I went to glue them together---then I had a little trouble around the nose section (I’m assuming that’s due to some slight misalignment of the metal nose gear well box.) I had at first reversed part C-3, the interior support deck for the belly turret. It looks nearly square but actually has a slight taper and its narrower end goes aft. There is an extra set of rudder pedals included in the kit so I assume there’ll be a different version of the kit issued at some point.

Because of the airplane’s size and the visibility of its interior, I decided to leave the bomb bay doors open so I built up the kit-supplied 500-pound bombs for the inside load. The bomb fins were tricky to fit and I got some with slightly misaligned fins. For underwing stores there are two choices: additional 500-pound bombs or gun pods, so the builder needs to drill the appropriate holes for each….they’re clearly laid out in the instructions. Having decided on bombs for the bomb bay, I opted to use two double .50-caliber gun pods beneath the wings instead.

I needed to file the landing gear stubs that mounted into the wheel wells to get them to fit into the square sockets provided. Parts K-28 and K-29, the back sides of the firewalls under the cowl flaps at the front of the nacelles needed to be sanded a bit to blend in with the nacelles and their tops have shallow sink marks that I was almost able to sand out. Each cowling also had a sink mark on the inside.

The engines are somewhat simple for a model of this size and are the wrong kinds as well---they have a double row, seven-cylinder engine when the real A-26 had R-2800 engines with two rows of nine cylinders. The kit is tight enough to enable me to just snap the engines and cowls to the firewalls with thoughts of maybe changing them out at a later date.

The glass fit fine until I went to glue it in place, then one side of the canopy moved off to one side. Part L-12, the center dash cover, needed some sanding to fit, and that may have contributed to the windshield problem.

I painted the airplane with flat paint, and in hindsight that was a hindrance to applying the decals. I overcoated it with gloss clear but it never really got glossy enough to suit me. The decals went down OK but were very brittle and several of the square red wing boxes broke up. Also, each decal had a number by it and when I put them in the water, those would disintegrate and I had to be very careful so pieces of them didn’t get under the decal. I overcoated the decals with Future floor wax which blended most of them in. I believe the full-size airplanes were a gloss or at least a semi-gloss finish, so I left a sheen on mine. Overall I liked the kit, but if I built another one I would paint it with gloss paint.

Thanks to MRC and to IPMS/USA for the opportunity to review this kit.

I noticed that you used the SAC landing gear that is designated for the A-26B on your A-26C model. Do they fit right in?