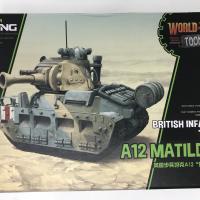 Here is another caricature tank from Meng Models. These models are obviously targeted at kids, but many of us “serious” modelers are finding them to be fantastic “breaks” from our usual in-depth subjects. I am seeing them on the contest tables as well.

The kit comes in a strong end opening box with a colorful painting of a British Matilda. All the sprues, instruction manual and tiny decal sheet are located within a single plastic bag.

All the parts show a good amount of detail, and it is intended to be a “snap fit” model. The instruction manual is easy to follow, but the painting and decal diagrams are very small and quite dark, making it a little difficult to determine decal positions and color demarcation areas. There are two decal schemes offered: a British tank in the Caunter paint scheme and a captured German tank painted in Panzer Grey. The model builds up quickly, although, care is needed with some quite large sprue attachments. Make sure these are completely eliminated so the parts fit cleanly. I found the tolerances quite tight and in some cases paint had to be removed for parts to slot into their mounting holes easier.

The most difficult part of this build was painting it. Some thought is needed into how to go about it, especially the wheels, the tracks and slots in the side skirts. The tracks and all wheels have to be attached before the upper hull is fitted to the lower hull assembly.

I started by painting the entire tank and all associated parts Tamiya Desert Yellow. Don’t forget the inside of the skirts and sponsons. The tires were painted Tamiya Rubber Black. When dry, the wheels were assembled and the tracks slid over them. I ran a strip of tape along the underside of the upper tracks which are visible through the side skirt slots. This prevented getting paint over spray on them. The tape was easily removed with tweezers after all painting was done.

The two hull parts had to be joined at this point so the seam at the front of the upper and lower hull could be removed. The rest of the tracks and lower hull were masked off in preparation for the next colors.

The Caunter paint scheme was a British three color, hard edge camouflage used throughout the North African desert war. Until recently it was though that a light blue was used in conjunction with tan and dark green. It is now understood that instead of blue a light green was used. Reviewing pictures on the internet, I mixed olive drab and light blue until I had a green I thought looked “right”. I sprayed the light green mix followed by dark green, using blue painters tape to produce the hard edges of the camouflage. This was easier than it looked, but time consuming.

The exhaust pipes were painted and weathered to look burnt and rusted, then attached to the rear hull deck and the muffler. Handles, spare track links and other accessories were added to complete the building task.

The tank received a gloss coat, and when dry I applied the decals. They adhered well – all six of them! I used Microsol to soften the decals and make them conform over rivets and other details. Another gloss coat sealed the decals. I weathered the little Matilda with a wash and chalk powers, followed by several flat coats. To finish up I used more pastel chalk to add dirt and dust to the tank to look like it was fighting in North African desert against an army of Egg Panzer IV’s!

I thoroughly enjoyed building this little tank, and it took second place in its category at the recent Moss Con model show. I would recommend the kit to modelers of any skill level from beginner to advanced. My sincere thanks to Meng Models and IPMS foe allowing me to build and review this Matilda.