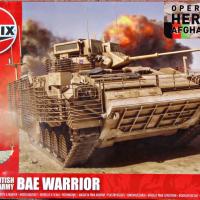 Airfix continues its 1/48 line of military vehicles from Operation Herrick in Afghanistan. This new release is the warrior infantry fighting vehicle fitted with slat armor and jamming devices for IEDs. Like the American Bradley and the Russian BMP, the Warrior first entered service in 1984 and has been updated as time as gone on. Armed with a 30 mm cannon and a 7.62 mm machine gun, it carries seven fully armed infantry men. It has seen action in the last years of the Cold War, both Gulf wars, Afghanistan and peace keeping in Kosovo. The model presented here includes slat armor and electronic countermeasures to IEDs.

This is a new kit molded in the typical blue grey Airfix plastic. There are seven sprues for a total of 257 parts. Slat armor is included and it is molded in plastic and appears to be over scale, but I don’t have measured drawings to compare it to, only photographs that I have found online. Looking at the photographs and the artwork on the box, the plastic slat armor does seem oversize in comparison. That being said, I appreciate the inclusion on the slat armor. There are markings for one vehicle and the color scheme is identified with Humbrol colors. The spures were packed together with no additional padding. While there wasn’t any broken pieces, there were a few parts loose in the plastic bag. The lower tub of the hull was warped. Airfix does have a sheet of photoetch for this kit, but must be purchased separately. There are no figures included with the kit.

There is a basic interior for the Warrior so the first twelve steps include assembling the driver’s and troops seats and miscellaneous storage that can be seen if you elect to keep the hatches open. The attachment points for the benches are shallow, so please test fit before they are glued to the tub. If you opt to keep the driver’s hatch open, all that Airfix provides is the driver’s seat; no instrument panel or other controls. Once the interior was completed and painted, it was time to join the two parts of the hulls together. Since the lower tub was warped, it took some test fitting and pressure to keep the lower and upper tubs square. There are some gaps, but since they are hidden by the tracks, I chose not to fill them.

Once the basic body is assembled, the running gear is assembled next. There’s a jig included to make certain that the suspension arms are even. It’s a nice little tool and I appreciate the inclusion of this special tool. Once the legs are secured, I deviated from the instructions. To accommodate the track, the instructions want you to assemble the road wheels one half at a time. After test fitting a completed wheel with the track, I determined I could get away with gluing all of the road wheels in one sitting and assemble the track accordingly. The track comes in segments. Pay close attention to the instructions so the right pieces go in the right order. If not, you may have to trim the tabs to make the track segments fit. The fit is excellent. Very impressive. Since I followed the instructions out of order, admittedly, the track segments were a bit tough to guide through the upper road wheels, but at least I was able to paint them as assembled wheels rather than two parts.

The remainder of the hull goes together well. You do have to make a decision if you want to have the hull hatches open or closed. I chose open. There were some pin holes in the headlights, but the remaining bits and pieces on the upper hull went together easily. It does, however, take some thought when it comes to assembling the bar armor. I painted the backside of each panel before it was assembled to the hull as well as the side armor of the vehicle since it would be difficult to evenly paint the side once the bar armor was on. As stated earlier, when compared to photographs, the bar armor is out of scale, but knowing how difficult photoetch can be, I appreciate that Airfix took the time to mold this in plastic. The individual pieces are well engineered and went on without a problem. That being said, the front left panel was not square. The attachment point, I believe, was not completely molded so it is slightly askew. Let’s just say that it was hit by an RPG and call it even!

The turret has a rudimentary interior – the turret basket with two seats but the cannon doesn’t have a either a breech or ammunition so I decided to keep the hatches closed. The viewing ports are also solid plastic rather than transparent, but I am okay with that. The turret and its fittings went together fairly well. I would suggest studying the smoke grenade launcher diagram closely to get the right angles of each canister. There are two antennas that go on either side of the turret. They seem on the brittle side, so be careful when removing them from the sprue. The slat armor that fits around the turret comes in four separate pieces that are glued together as two subassemblies and then attached to the turret. The attachment points are not terribly deep, so care must be taken to insure a good fit.

Given the particular shade of tan that is called out in the instructions, I broke down and purchased the Humbrol color – Desert Tan (237). It’s too thick out of the bottle for airbrushing, so had to experiment until I got the right thickness. I gave it a dust coat of Model Master Dark Earth. Decals for one vehicle are included. The decals went on except for the labels for the fire extinguishers. They refused to conform to the round extinguishers. After several failed attempts, they ended up in the round file.

I am impressed with the new line of 1/48th kits that Airfix has come out with. While there are some minor fit issues, they go together quickly and despite out of scale slat armor, are nice additions to anyone interested in the modern armor. My thanks to IPMS USA and Airfix for giving me the opportunity to review this kit.