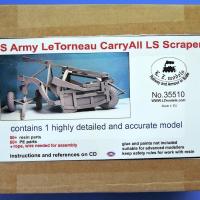 L.Z. Models has added another great vehicle to their line of wartime construction equipment with a resin kit of the US Army LeTourneau CarryAll LS Scraper. The CarryAll is a smaller LS variant of the famous Le Torneau scraper, and was used widely by US and other armies during and long after WWII. The Scraper was usually seen towed by a CAT D7 and later a D8 tractor, and is a perfect companion to L.Z. Models’ tractor and bulldozer kits.

The L.Z. Models kit is a challenging build due to the intricate cabling system, but was enjoyable to work through the assembly. Resin and photoetch experience is required for this kit.

Opening the box reveals a plethora of resin parts, some very big, and some very small. The detail is fairly good. Most of the parts are attached to casting blocks and contain some flash typical of resin kits. I did not notice any air bubbles in the resin parts during assembly of the kit. The kit also contains two photoetch frets and a length of cotton string.

The instructions include some brief notes on working with resin parts and CA glue. They also include a sheet showing all of the parts and their numbers. The parts are not numbered on the casting blocks so reference to the parts sheet will be necessary to identify the correct part, particularly the pulley wheels.

The assembly instructions start with the front wheel carriage and front fork on the hopper. I quickly realized I was missing one of the major parts for the front fork. I sent off a quick email to L.Z. Models, got a reply back in about half an hour, and the part showed up in the mail, all the way from Ireland barely, a week later. Great customer service by L.Z. Models!

Assembly of the resin pieces went together very well. Many had pin connections to aid in locating the parts correctly.

The very complicated cable threading was done, with only one known goof-up, but needing about 50% more string than came in the kit.

To finish, I primed the kit, painted it olive drab with some post-shadowing and highlights, and added some pigments. It turned out to be a nice kit of an unusual subject and I enjoyed the build. Follow the cable instructions carefully, watch the location of the pulleys, and you’ll have a great kit.

Thanks to L.Z. Models for making a nice kit and for their great customer service. Thanks to Stevens International for providing the review sample, and thanks to IPMS for the review opportunity.