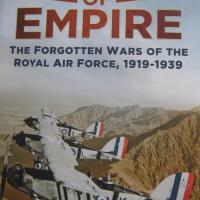 At the end of World War I, the British Empire had to expand to take over some of the territories in the Middle East and Africa, most of which had been under the control of the Turkish Ottoman Empire. Turkey had sided with the Central Powers, and the British took the regions almost by default. The big question, in both the Middle East and Africa, was how to control these areas economically. The British government assumed that they could control these diverse groups, mostly on a tribal level, using standard cavalry and infantry units operating in a police role, but they discovered that this was much more expensive than they had imagined. The areas in question, some of which are still problems today (Afghanistan, for example), were dominated by small Islamic tribes, who had no idea of how western civilization could help them move into the modern world. Tribes fought against other tribes at the least provocation, and slave trading was rampant, and in fact, still exists in some of those areas. The areas themselves resisted traditional methods of control, with weather, distances, lack of water, and lack of vegetation making usual troop movements very difficult. In addition, living in those areas had to have been a miserable experience for the British, and even though they were able to recruit native troops from India and other areas, recruiting adequate numbers of soldiers was a continuing problem.

The British government ran up against some major problems, and some forward thinking individuals, especially in the Royal Air Force, felt that these areas could be controlled by aircraft rather than ground troops, and that this would be much more economical. The state of aviation development, with the aircraft being produced at the end of World War I, was such that some of the planes, including DE Havilland DH-4’s and DH-9’s, Handley Page 1500’s, Bristol Fighters, and Vickers Vernon transports, could be adapted for use in the Middle East. The ideas brought forward by R.A.F. strategists stated that these aircraft could be based in central locations, and that with the construction of primitive airstrips throughout the region, the planes could be used to punish tribal groups who got out of line by low altitude bombing raids against tribal villages and encampments. If they behaved and paid their taxes, there would be no bombing raids, but if they did not, the planes would visit.

Many of the men who would become leaders in the R.A.F. during World War II got their start as junior officers during this time period, and such people as Hugh Dowding, Arthur Harris, and Hugh Trenchard advocated the use of aircraft, some stating that the airplane could actually replace the ground forces to control populations that were out of control. Winston Churchill and T.E. Lawrence also contributed their ideas. Others advocated the use of armored cars, but although they were used, aircraft tended to be more effective. One way or another, the British had to control the warlords, jihadists, and hostile tribal groups. As time progressed, more modern and effective airplanes replaced the World War I types, and the Royal Air Force developed techniques that would eventually evolve into the close support tactics used by modern air forces during World War II.

The author begins with an example of an R.A.F. pilot, flying a BE-2C during 1916, attacking a dissident tribal group, causing extensive devastation using small hand thrown bombs, and the lessons learned from this event caused the British to consider using the airplane more extensively. Over the years, especially after 1918, the British discovered that airplanes could be very effective against locally organized tribal groups. Most of these had never seen an airplane before, and the effects of explosives made the leaders think about how to best achieve control. The British operated in many different areas after the war, and each adversary was unique in its response to aerial attack.

The author goes into great detail discussing the conditions under which the R.A.F operated, and how the leadership in Parliament battled for control of the problem. The Royal Air Force had become an independent force after World War I, and there were many jurisdictional disputes in Parliament, as some leaders felt that the Army and Navy should control aviation, rather than R.A.F. officers.

After 1945, the R.A.F. continued to use aircraft to put down uprisings in various parts of Africa and the Middle East, and their tactics were similar to those used in the twenties and thirties, only the aircraft were much more modern.

The author does a very good job of explaining what the problems were, who was involved, and what actually happened. In addition, the information presented in the book gives the reader some background information on how these areas have developed today, and how various ideologies, notably Islam, have continued to be a problem in these areas. After you finish reading this book, you will have a much better idea about what is going on today, and why the civilized western democracies are having so much trouble dealing with these radical societies.

The book is aimed at students of history, not modelers, and although there are a number of photos of aircraft include in the book, if you want to model these aircraft, there are many other sources of colors and markings for these types. There are many kits of the aircraft by Airfix and Frog, among others, but this book tells the story but doesn’t provide much detail for modelers, although the front and rear covers have good color photos, one of a Wapiti formation and one of a Vickers Vernon, which provide enough information for a modeler.

I borrowed this book from my son, the airline pilot, whose history library is bigger than mine. I found it fascinating, and would highly recommend it to anyone who wonders just exactly what went on in those areas, and why they have been so resistant to change.

Thanks Joe, for the loan of the book. You’ll get it back one of these days.