Tactical Reconnaissance in the Cold War (1945 to Korea, Cuba, Vietnam & The Iron Curtain) 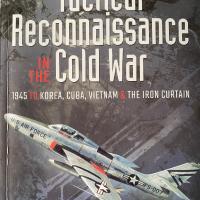 Dangerous times followed the end of WWII. In quick succession, the emerging superpowers not only armed themselves with nuclear weapons but showed an overt willingness to use them. The spread of communism into the Eastern European bloc countries and the Asian continent created a need for information so the United States and her allies could make informed decisions about the enemy's intentions. The exploits of the U-2 and SR-71/A-12 pilots who braved overflying hostile territory at high altitude in order to get a strategic, big picture of our enemies have been well documented. What we don’t hear a lot about are the efforts of those tasked with collecting localized intelligence for use on a more immediate time scale. Things as simple as weather conditions to the location and strength of enemy forces are critical to those who decide military actions. That is the historical gap that author Doug Gordon is attempting to fill in “Tactical Reconnaissance in the Cold War.” His focus in this book are the operations of the USAFs tactical recon operations from the end of WWII through the Vietnam war.

This book is organized by theatre of operations starting with the rapid downsizing of tactical recon units at the end of WWII. Here we follow the deployment of A-26, F-6 and P-80 aircraft in Europe and Japan. This was a transition period moving from props to jets. However, as we will see, some of the older aircraft would serve far beyond expectations. In July 1950, North Korea invaded South Korea and the US, and its United Nations allies were drawn into the conflict. Tactical recon was a priority, but shortages of trained crew and aircraft kept what forces were available fully tasked. The venerable Mustang was finally withdrawn in favor of less vulnerable jets. Even US jets would find their match when the Mig 15 appeared. The A-26 (now the RB-26C) provided night recon taking photos with the use of flash bombs. Even the F-86 Sabre was fitted in limited numbers with camera equipment.

Chapter three deals with what could be argued are strategic recon missions, but the author classifies them as tactical because tactical aircraft with pilots trained in that mission performed them. With code names like Haymaker, Heart Throb and Slick Click, these missions photographed targets in the Soviet Union, Eastern Bloc countries and North Korea. Some new types appear in these operations namely the F-100 Super Sabre and Martin RB-57. The fourth chapter covers operations in Europe and the never ending need to keep tabs on the status of Warsaw Pact forces. This was critical given the close proximity of the enemy to NATO forces.

Next the book shifts to operations in the United States during this period and in particular those at Shaw AFB where training for tactical recon crews were conducted. The RB-66 Destroyer, RF101 Voodoo and the RF 4C Phantom are introduced. Training of this nature was important in the age of purpose-built recon aircraft. The Cuban missile crisis response is included since those aircraft mobilized to Florida from Shaw AFB. The focus of the next chapter is operations in the Pacific theatre between the end of Korean conflict and the start of the Vietnam War. These missions focused on maintaining the cease fire in Korea as well as activities in Taiwan, China, and Southeast Asia. Electronic tactical recon was added to the suite of intel gathered by the USAF and the RB-66, RB-57 and RB-26 were the platforms used. Operations in the Vietnam War are covered next. Operating in one of the most hostile environments for air combat, the tactical recon resources were strained during the entire war. The timeline for information was shorter than ever before as evidenced by RB-66s flying just ahead of strike groups looking for missile site emissions. Pre- and post-strike photos were taken of each target. That should give you some idea of the volume of work these aircraft were tasked to perform. The book concludes with two appendix sections covering the aircraft types used by the USAF for tactical recon and the cameras and types of photo recon methods employed with sample photos.

For the modeler this book offers a nice selection of period photos of the aircraft and the cameras used including pictures of how they were installed. It’s by no means a definitive reference for any of the aircraft involved. As a historical account, the author has comprehensively covered the USAF operations worldwide with detailed unit movements and commentary from pilots who flew these missions. Tasked to fly mostly unarmed aircraft at altitudes that made them vulnerable to enemy fire from the ground and the air, they performed their missions with pride. In some cases, such as the RB-26 they flew aircraft long past their prime. This book makes it clear that throughout this period, tactical recon resources were always in short supply more because of equipment then willingness to do the mission. I would recommend this volume to anyone with an interest in aerial reconnaissance and the people who carried out this mission. It’s a fitting tribute to everyone involved.

Thank You to Casemate for the sample volume and to IPMS for allowing me to review it.