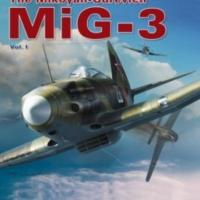 I received this book as a big fan of the MiG-3 WWII fighter and hoped to get more info on the subject.

There has not been much written on the actual aircraft and even fewer photos.

This is volume 1 in the MiG-3 Monograph Series #80 and deals mainly with the development of the aircraft.

Most of the first half of the book deals with other aircraft in Soviet development  and concentrates on the designers and design boroughs of the VVS and others.

The majority of the book talks about the disjointed workings of the soviet government under Stalin and how designers of early soviet aircraft were shuffled around and sometimes imprisoned.

This book shows how the early designers cared about only speed and not much on aircraft strength and maneuverability.  Many pages talk about the development of just early soviet power plants and engines.

Surprisingly the book talks a lot about the Polikapov I-16 and only gets into airframe design leading to the MiG-1 and 3 in the last 10 percent of the book.

Late in the book it talks about Mikoyan and Gurevich taking over the project thus naming it MiG-1.

If you like reading about the history of Soviet WWII aircraft designers this is the book for you with its great source of information.

If you are looking for information on the details of this aircraft (MiG-1 & 3) there is still very little available but this book has more than any other source I have found.

I hope they plan a volume 2 or 3 in this series with more aircraft detail.

Thank you to IPMS/USA and Casemate/Kagero publishing for furnishing this review copy.