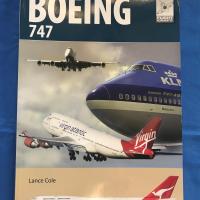 Lance Cole is the author of this and many other worthy books detailing numerous aircraft types. This book – Boeing 747 is a timely and fitting tribute to one of the all-time classic aircraft and the very first “Jumbo Jet”. As the 747 is being retired by most airlines and carriers after 50 years of faithful service, plus the fact that I personally have flown as a passenger on every model of the 747, except the 747-8, this was a book that I thoroughly enjoyed reading.

The colorful cover includes three iconic photos of the 747’s grace, power and size, followed at the bottom by a nice image of -300 in Qantas colors. The back cover highlights three models and an overview of what’s inside the book. Throughout the book, colorful photos adorn each page.

The introduction is a nice tribute to the aircraft and outlines a few achievements and airlines that flew it, as well as a brief explanation into her retirement and aircraft that are stepping to take the 747’s place.

The second chapter, Design by Dynamic, explains in detail the development of what would become known as the Boeing 747-100 (Classic). Some of the massive costs involved, tried, proven and as yet untested design concepts that would become the Queen of the Sky. The sheer guts and determination of Joe Sutter and his team to build something who’s initial thoughts for the 747 design were famously scribbled on a napkin is unfathomable. Sutter already had extensive large aircraft experience developing the 707 and 727.

Ex Vickers BAC designers who designed the VC-10, also brought their knowledge of “fail-safe” multi system hydraulic and electrical systems which lead to a safety-first design concept. They would also use this in the development of the T tailed Boeing 727.

The 747 resulted largely due to a failed attempt to supply the US military with a large transport aircraft and Boeing repurposed the design into the 747. The Lockheed C5-A Galaxy won that military contract.

Boeing “Bet the Farm” on the 747 and won in terms of building one of the greatest airliners in the history of civil aviation.

The size and complexity of designing and building this aircraft is explained in sub sections on building an overall safe structure, wing sweep, roll out time and delays, initial engine issues, first flight, climb performance issues (engine related), growing pains and the designation of the -100.

The engine issues were due to them being mainly under powered. Pratt & Whitney lost out to General Dynamics when designing an engine for the C5-A Galaxy and repurposed the JT9-D engine for the 747. The delays in working through the engine problems resulted in newly built 747’s being parked at Paine Field without engines.

The rest of this paragraph describes in detail initial launch customer, Pan Am, followed by the other US based carriers like Eastern, TWA, Northwest, American, Continental Delta and many others. In each airline, the reader is educated on how many they operated, class structures and other interesting information.

To conclude the paragraph, 747 early incidents and survivability is touched on and include notable incidences.

In “Developing the Queen of the Skies”, we are taken through a summary of the design improvements and new models that were released from the -100, -200, -400, SP and the current -8.

Engine development include improvements to the Pratt & Whitney engine, the introduction of General Dynamics and the Roll Royce RB211 series.

The development of the -200 series and main airline customers that operated the type like KLM, UTA, Alitalia, SAS, Cathay Pacific and Qantas, Korean and Virgin Atlantic. Another notable -200 operator is the US Air Force in the guise of Airforce One.

The SP (Special Performance) stubby 747 is highlighted next, with key operators being Qantas, South African Airlines and Pan Am being listed. Design and structural construction improvements were described in detail, as well as the reason for developing the shorted fuselage.

The -300 follows and was a fairly short lived modification and improvement from the -200. Its main feature was the extended upper deck. The spiral stair case was removed and replaced by a new straight staircase.

In the late 1980-s, the -400 was launched, offering revised wing aerodynamics and airframe systems and efficiencies, notably the electronic (EFIS) flight deck and two pilot operation. The Boeing 747-400 became the most popular and reliable long haul transport in the airline world spanning the 1990’s and 2000’s. Northwest Airlines was the first airline to fly the -400 followed by many other airlines. Qantas operated a one off design known as the “ER” (Extended Range) with higher gross weight, increased range, stronger undercarriage and new engines to be able to operate along the wind critical Los Angeles to Melbourne route – a 13 to 15 hour odyssey (I have flown this route frequently) on trips back home to Australia.

The paragraph concludes with the development and launch of the Boeing 747-8. The author refers to this incorrectly throughout the book as the “-800”. It is simply “-8”.

The -8 offers a longer fuselage allowing for more passengers, or freight to be carried, and an extended upper deck, compared to the 747-400. Upgraded aerodynamic include modified wing tips and new General Electric (GenEx) engines.

A -8 freighter was also built with the return of the shorter upper hump of the earlier -200 hump.

Moving on to 747: Serving the World, the reader is taken through the major airlines that operated the 747 and further explains the fleet that each operated. British Airways starts off the list and rightly so. BA was the largest operator of the 747 and terminated -400 service in the summer of 2020.

British Airways continues in a separate section that details the BA and Rolls Royce relationship.

Qantas follows and tells us what models, engines, and some modifications/improvements were made to their fleet due to the longer flight routes flown and passenger/payload demands. Ansett, Lufthansa, Air France, Japan Airlines, Aer Lingus, Singapore Airlines with their “Big Top” and “Mega Top” 747’s and more than a dozen more carriers were also talked about.

An interesting, few pages are devoted to a pilot’s experience flying the Boeing 747 and takes the reader through taxi, take off, cruise, descent and landing. The operating do’s and don’t and the ease and responsiveness of such a large aircraft.

A number of “close calls” and accidents are finally detailed, along with a conclusion about the ultimate and untimely retirement of the Boeing 747 (principally the -400). However, the -8 airframe and others, mainly in freighter configurations, will still be prying the skies for many years to come.

The final chapter is all about us modelers and includes a number of diecast and plastic models for builders and collectors. At the top of each left hand page “Boeing 747” is spelt incorrectly as “Being747”.

The author uses many pages to show close up pictures of several manufacturers of diecast models from very expensive to more affordable examples in various scales. The detail shown and workmanship is outstanding, especially (obviously) on the more expensive models. Manufactures like Wooster, Welsh Models, Aviation Direct and Herpa are highlighted in the diecast range.

Revell and Airfix are well represented in the plastic kits range and spends quite some time on the Revell (Former Zvezda) 747-8 range. The Zvezda model is “light years” ahead of both the original Airfix and Revell 747-400 models. I have personally built and modified both the Airfix 747-100 and Revell 747-400 to be more accurate - Airfix does not have a wing box and the Revell 747-400 includes many inaccuracies such as the nose and cockpit shape, wing root angle of incidence and the molds are showing their age.

I found this book to be a most enjoyable read and a worthy addition to any aviation related library. The author, Lance Cole, should be commended on his research and devotion to the subject and the timely release of this edition.

I would like to thank Pen and Sword and IPMS USA for the opportunity to read and review this outstanding book.

I am going to have to…

I am going to have to disagree with the review author on this book, and my apologies to Jarrod for giving a different viewpoint.

I was very disappointed with the book overall, but especially with the 'modelling' section.

The FlightCraft series now runs to over 20 volumes and started as a series of brief monographs with the modeller firmly in mind, as indeed did its sister series, ShipCraft and TankCraft. The basic concept was to present a concise history of the chosen subject, followed by a large section devoted to modelling, including builds, galleries and miscellaneous items of interest. I have a number of the early tomes, written by such modelling luminaries as Neil Robinson, Martin Derry and Tony O’Toole. Each is a valuable modelling reference, as are the Ship and TankCraft books I own.

Unfortunately, this particular book seems to have lost its way and blundered into the FlightCraft series by accident. While there is a 26-page ‘modelling’ section at the end of the book, it is largely devoted to photospreads of the author’s diecast collection, with just 4 pages allocated to real model kits – 2 of those are taken up by Revell publicity photos. There are no builds or reviews, merely a list of kits with short remarks. There are no plans, there is no walkaround and very few detail photos, and while the colour profiles are nice, they lack essential modelling details such as paint callouts.

I could go on about the rest of the book, but I'll confine myself to the 'modelling' part of the book. Needless to say, I wouldn't recommend this book if you are looking for either modelling tips or a decent history of the type.

Thanks for the note.