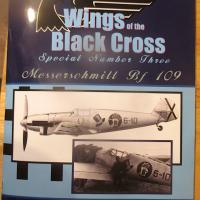 The author presents a brief history of the development and operational career of the Messerschmitt Bf-109 series, but the main emphasis of this book is the explanation of the development of colors and markings used for these aircraft. Granted, this topic has been addressed before in many publications, and the Bf-109 has probably had more written about it than any other combat aircraft from the World War II Era.

Beginning with a brief description of the origins of the aircraft, a brief account of the development and service career is presented. Following this is a short section entitled “Camouflage, Markings, and Heraldry”, which explains how the Luftwaffe fighter groups were organized, and the color coding that was used to identify sub-groups within units. The author also explains the development of the specific colors used for overall camouflage schemes, as well as individual unit variations used for different climatic conditions.

Starting with the introduction of the Bf-109A in the Spanish Civil War, the progress in camouflage and markings is described, using period photos of exceptional quality to show how these changed as combat conditions changed. Every so often, the photos are supplemented by excellent color side profile drawings of some of the aircraft shown in the photos. Incidentally, none of the photos is credited to a particular source, and this is understandable since most of the photos were obviously taken by members of the units whose aircraft were being photographed. When possible, some of the people in the photos are identified, but often they are not. There are some closeup views of the markings being discussed, and these often appear in the color drawings. None of the photos is credited to any particular source. It would be interesting to know who took the photos, as most of them appear to have been taken by Germans.

The emphasis of the book appears to be the early career of the Bf-109, as coverage of the Emil model ends about halfway through the book, where the vast majority of Bf-109’s were later models, and there are only four photos of Bf-109K’s at the end of the book. There is only one photo of a two seat Bf-109G-12 transition trainer, and no color drawing.

Although this book was intended for use by modelers, it really serves as a general textbook covering Bf-109 camouflage and markings. There is very little coverage of anything besides side elevations, and the reader is left to guess or seek other sources for camouflage patterns on the wings and tail units. Of course, the bibliography at the back list 27 books and other publications that also cover the same basic subject, and many of the ones listed have wing camouflage pattern information.

For the modeler, the book will be most useful when information is needed for aircraft used in the Spanish Civil War, but with other sources supplementing the basic information provided in this book, historically accurate models of most of the Messerschmitts used during World War II can be made.

This can be a very useful source of information on the Bf-109.

Thanks to Eagle Editions and Phil Peterson for the review copy.