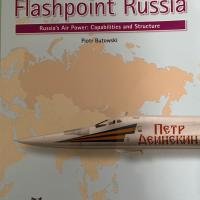 This is Piotr Butowski’s fourth book for Harpia Publishing on the Russian Air Force. The first two books focused on the aircraft and helicopters currently used by the Russian Air Force and the third book focused on Russia’s air-launched weapons. The focus of this volume is on the structure of the Russia military aviation, with commentary on its possible future.

The book is divided into three chapters with several appendices. Chapter One discusses the evolution of the Russian Air Force’s current structure. Chapter Two delves into the different layers of this structure starting with the upper levels and moving on down through to individual units and air bases. Chapter Three discusses the Air Force’s acquisition strategy and the author’s concerns for the future.

When the USSR dissolved, its powerful air force was also broken up between many of the USSR’s former republics. While Russia would have received a large share of the USSR’s aircraft, as most of the USSR’s newer aircraft were forward deployed closer to where it was anticipated that they would have been needed if war had broken out, many of the aircraft that remained in Russia were older, less capable aircraft. During the break-up of the USSR, Russia took control of many of the forward deployed units and redeployed them to Russia to ensure they became part of the Russian Air Force when it was reconstituted in May of 1992. In addition to redeploying units, Russia also entered into agreements with other states for some aircraft to be transferred to Russia.

As a result, when the Russian Air Force was reconstituted in 1992, it was in a bit of disarray as the logistics of where to put all of these aircraft and their units had to addressed and a new command structure established to control them all. Chapter One discusses some of the different organizational configurations that were tried as the Russian government worked to come up with a manageable and logical structure for its aviation units. Some of the growing pains the author describes will sound very familiar to those experienced by Western air arms.

Chapter Two is the bulk of the book and discusses the structure in detail starting with the various Military Districts and working down to the individual bases, aviation regiments and independent units in each District. The discussion is well supported by color charts of the different Military Districts showing the location of the airbases in the district and orders of battle listing the units and aircraft assigned to the district. Beautiful color photographs illustrating the current aircraft of the Russian air arms are scattered throughout the book with very informative captions. The chapter not only includes units of the Russian Air Force but also Naval Aviation and some of the independent services.

Chapter Three is a discussion of the ups and downs of Russia’s military acquisition programs. I was surprised to discover how dependent the acquisition programs are dependent on the world oil price for funding. In the 1990s Russia stopped purchasing new aircraft and it was not until the turn of the century when oil prices reached all time highs that it was able to start purchasing new aircraft to replace obsolete ones. As oil prices have fluctuated since then, orders for new aircraft have also fluctuated.

The book is an outstanding complement to the first three books and a good stand-alone reference on current Russia aviation structure. The photographs are superbly reproduced and the captions are very helpful.

Thanks to Casemate Publishing/Harpia Publishing for the review copy.