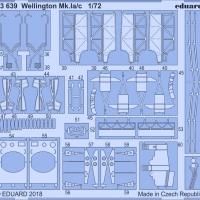 IPMS/USA again thanks the Eduard team for sending us more of their prolific output targeted toward improving already great kits. Thanks to Phil and John for obtaining the sets for the team…

This set is a now-expected high-end upgrade to the 2018 release of the new-mold Airfix 1/72 Wellington 1a/c. Included are color fret elements including the instrument panel, interior control and indicators, and various bits and bobs that make up a British design from the 1930’s.

The Airfix Wellington is part of the new Airfix from Hornby, and has been profusely reviewed elsewhere. It is an excellent kit, only requiring a bit of care in lining things up when it comes time to assemble things. The Eduard set improves the lot, and is invaluable in making the kit really shine. Micro-detail is evident everywhere, and standard hand-painting will be hard-pressed to come to this level of detail as evidenced on the Eduard improvements

This set upgrades the interior and part of the exterior of the Wellington. I found it to be the one item, if I had to choose, which would be essential to improving the kit. Included are several instrument and gage panels, along with details the fore and aft gun turrets, seat belts and harnesses, and parts for the landing gear brake lines and nacelle doors.

Everything had utility, and with the exception of the brake lines (which I opted to replace with fine sprue due to its more rounded shape verses “flat” 2D lines, I used them all. The instrument panels in particular were worth the price of admission. The kit is unique in that there are many parts listed as “not required to be installed if desired due to their not being able to be seen once the model is finished.” These items were shaded dark Green on the instruction sheet, and would have seriously simplified assembly. You could easily cheat and paint the whole interior black and most viewers would not notice.

I rattle can (Tamiya Gray) primer painted the unpainted fret, and just brush-primered the parts on the color fret requiring it. The Attachment points are easily separated by a good quality sharp knife blade, and attached with Polyurethane glue like Gator-Grip ® or gel and/or thick superglue.

In case of the side sliding windows on the cockpit, the instrument panel, throttle island and seat belts would definitely be seen from outside a completed kit, hence my desire to put them all in. Closing the top and bottom seams on the fuselage was an exercise in patience, and almost resulted in the model being chucked. That was going to come later after the flaps were installed incorrectly by me. But that’s for the next review.

All in all, a worthy set for the adventurous in the “one true scale”.

Again, thanks to the team at Eduard for providing this set to IPMS USA, and also to John and Phil for their work in getting it all to me to provide entertainment for our dear readers (and outline pitfalls for the builder who wants to do it all correctly the first time!)