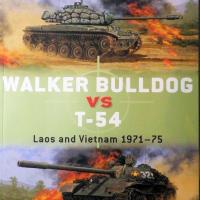 Osprey’s Duel series is a well-established line of books providing an overview of machine-on-machine combat action from design and development through combat. The books include a thorough analysis of the elements which affected the overall outcome of specific battles.

This volume focuses on some lessor known armor actions of the Vietnam war. When we think of the battles in Vietnam, we generally don’t think about armored warfare, we tend to focus on guerilla warfare, aerial bombardment, and helicopter assaults. However, near the end of the war there were few battles featuring rather extensive use of armor by the North (PAVN) and South (ARVN) Vietnamese armies. The ARVN’s main armor component was the M-41 Bulldog light tank, which by the early 70s had been long since retired by the U.S. Army. The PAVN had supplies of Soviet T-54s, and Chinese produced versions of the T-54.

As with all the Osprey Duel series books, most of the book provides a detailed description of the vehicles from inception thru development and eventual deployment. It does this through photos, drawings, and details from the vehicles’ operational manuals. In addition to the tanks’ details, the description also includes detailed diagrams of the various types of munition used by the two tanks. On paper, it seems T-54 had the upper hand due to superior armor and the powerful 100mm gun; however, as the author explains, the Walker Bulldogs superior maneuverability and 76mm gun could win the day, especially with an experienced ARVN crew

The book details the combat actions during the LAM SON 719 operation into southern Laos, and the 1972 Easter Offensive. Both actions are followed with statistical analysis of the battles and their results.

Overall, this was a quick and interesting read. While the book did include numerous interesting photos, diagrams, and maps, I’m all for more photos. Still, I’d recommend this book to anyone with an interest in the lessor know armored operations in the Vietnam war.