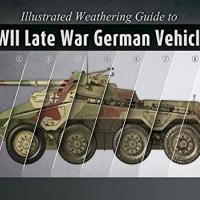 It is arguably safe to assume that most modelers who visit the IPMS Reviews website know a thing or two about assembling models, at least.  I think it is also safe to assume that most Armor modelers know that you don’t need to start painting until well into the assembly process, many times not until the very end of the build.  That is where Mig Jimenez’s recent offering starts – he takes the armor modeler from an assembled kit through to the finish line.

The Illustrated Weathering Guide to WWII Late War German Vehicles takes a dive into finishing ten iconic late-war German AFV’s, and while no can argue that (one) goal of this book is to market Ammo products, the information contained between the covers is still both valuable and informative.  Let’s face it – Ammo by Mig produces (or re-brands) many of the very best products available to modelers, and a ‘how-to’ book using those very products makes for an excellent great quick-reference guide.

The ringed, side-bound, soft cover book lays flat on your workbench, which is pretty handy if you have the space for its relatively large 12.5 x 8. 5" footprint.  Once the cover and preliminaries are out of the way, the reader is presented with a visual table of contents, with profile images placed next to the chapter and page numbers – a nice touch.

The tenth and final chapter covers the Panzer IV Ausf H Late Production, and looks like it was added after publishing since you need to scan a QR code with your phone to download it.  Presumably you can then print it out and keep it with the rest of the book.  I wonder how much of this was a mistake, or, more likely, a preview of regular additions to be added over time, to this initial list?

After the table of contents, the reader is brought through several pages discussing the book’s approach, the tools used (such as paint brushes and airbrushes) as well as a description of each of the products mentioned.  Like a majority of Mig’s work, everything is provided in both English and Spanish.

A note about the products – the paints used in the book are Ammo by Mig ‘yellow-top’ Acrylics.  Fortunately, the naming convention used for these paints is intuitive (i.e., ‘Dunkelgelb Light Base’), so if your workbench favors other paint lines it’s easy to find your color equivalents via the cross-reference charts readily available.

No less than 21 informational icons are used throughout the book, and defined up front with the products.

Each modeling section thereafter starts with a page providing a brief description of the vehicle, when and where it was fielded, where it was made, etc.  Also, not surprisingly, Ammo by Mig offers further informational resources for the vehicle type – from the company’s stable of books and periodicals.  Opposite this introduction page is a visual representation of the next 10-15 pages, showing a thumbnail profile of the vehicle going through its changes as painting and weathering steps take place – a brilliant idea, actually.  The modeler, once familiar with the book, can use this page as a ‘checklist’ to see where in the process he or she is at the time.

The next 10-15 pages of each section goes into detail on each step, one per page.  The products used and directions occupy the left side, while a full-size representation of the results are displayed to the right.  Nice.

And that’s it.  The 9 vehicles depicted take up the vast majority of all 231 pages, which is as it should be.  The back cover shows the thumbnail weathering images of the PzKpfw IV Ausf. H “Mark 4” vehicle that is downloadable from the internet, as explained earlier.

While most of the vehicles in the book use the same colors (they are all late-war versions, after all), many of the products and techniques were new (or their application was new) to even an old WW2 German Armor builder such as myself.  I found the entire treatment of the subject useful and I will have this book at arm’s reach on my bench for some time.  I think many other armor modelers, of any age and skill level, will agree.

I want to heartedly thank Ammo by Mig for providing this book for review, and IPMS USA for giving me the opportunity to review it.

Description and Thumb Nails
Previous Next