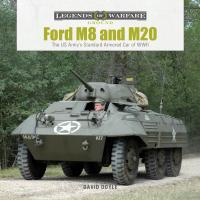 David Doyle's book on the Ford M8 and M20 is one of the latest entries in the 'Legends of Warfare' series with entries in Ground, Naval, and Aviation. The Legends of Warfare series has expanded rapidly since its 2017 debut in the market with now over 100 titles released. This hard cover series covers a wide variety of monographs at a good price point.

After many years of being published in enthusiast publications focused on military vehicle restorations, David Doyle 'graduated' to full-fledged books in 2003. His first book was a hefty 512 page history of US military vehicles. He has now had more than 175 books published in military vehicles, aviation and naval topics. David and his wife Denise have amassed a collection of ten Vietnam era military vehicles that still displays at shows. In June 2015, was honored with the Military Vehicle Preservation Association's Bart Vanderveen Award, given in recognition of "...the individual who has contributed the most to the historic preservation of military vehicles worldwide." Be sure to check out David's website at www.DavidDoyleBooks.com where you can see and buy at a discounted price off of MSRP, all his books that are still available.

The Ford M8 was a 6x6 Light Armored Car manufactured between March 1943 and June 1945 with 8,523 produced. Armed with a 37mm anti-tank gun, which was ineffective against German armor but quite effective against Japanese armor, the M8 was lightly armored that would not stop much more than small arms fire. In British service it was known as the Greyhound, but due its light armor, crews often ran with sand bags to provide additional protection. Although it featured a six-wheel-drive, it was essentially a road car and not an off-road vehicle, capable of speeds up to 55mph. The M20 scout car was similar to the M8 except it lacked a turret housing the 37mm gun. Its open top structure was usually fitted with a ring mount for a .50 caliber M2 heavy machine gun. Primarily utilized as a command or reconnaissance vehicle, some 3,680 were manufactured in 1943 and 1944. Utilized by many countries over the years, the M8 and M20 are still in service today in some countries.

David Doyle traces the U.S. Army’s Standard Armored Car of World War II, from the beginning of its development in July 1941. Other entries from Fargo (a division of Chrysler) and Studebaker are also presented. The development of the M20, T69, and T30 are also presented, all on the same basic chassis as the M8. The story of the M8 and M20 are told through carefully researched photos, many of which have never before been published, and are reproduced in remarkable clarity. Large clear photos, coupled with descriptive and informative captions, unlock the secrets of this armored vehicle.

The front cover features a color photograph of a M8 belonging to the Museum of the American GI in College Station, Texas [the full photograph can be found on page 052]. The rear cover features a black and white photograph of an M8 from the 2ndPlatoon, C Troop, 113th Cavalry approaching the Belgian – Dutch border on September 8, 1944 [the full photograph can be found on page 114]. You get 128 glossy pages graced by clear, well captioned, photographs. I counted 212 photographs; 59 in color and 153 in black and white. Many of the selected photographs are being published for the first time.

David Doyle does a great job of covering the U.S. Army’s Standard Armored Car of WWII through well-captioned photographs. Most chapters begin with about a page of text describing each variant, followed by period and modern day photographs. Doyle also includes walkaround’s of surviving M8 and M20 armored cars in color that show plenty of detail. This book is an easy read, with the majority of the text being in the photo captions.

One point that I was surprised at was the Secret project of converting the M8 to arm it with 7” rocket launchers. Five launchers were to be mounted at a 55-degree elevation on each side of the turret. An additional fifteen rockets would be stored in the vehicle. Ford bid on the project, but due to slow progress, and a changing battlefield, the project was dropped.