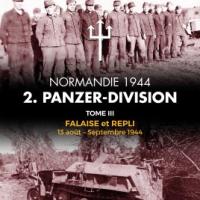 In English - This is a magnificent publication, rich in prose and photography. Presented in the French language, my lack of command of French means that I am missing out on the quality of the prose, but the photography and the captions for the images does not require precise translation.

This Is the third volume with the previous two volumes having been reviewed by IPMS in the past year. A message on the final page of Volume 3 states that a fourth and final volume will see the light of day, covering the period from Oct 1944 to May 1945 for the 2nd Panzer Division.

While the book is written in the French language, some ability to read and understand French would be extremely helpful. My command of French is, at best, that of a six-year old. But even with a remarkably disappointing ability to speak and write in French, I found that the captions of the photographs were not at all difficult to roughly translate and to understand. When all else fails, one can seek an online translation tool.

Sommarie (Summary, aka Table of Contents)

Please note that there is an error in the Page Number listings on the Table of Contents. The correct page for “Regroupement dans l’Eure” is page 280 and not page 322. This error is inconsequential and

As you thumb through this book you will begin to notice that a number of the photographs show German soldiers surrendering to Allied troops. That shows the trajectory of combat during the July/August 1944 timeframe. Another feature of the images throughout the volume is that many readers in North America will be viewing them for the first time. The quality of the images is outstanding, and the subject matter is fascinating and historically relevant.

The maps that are provided are detailed and very useful when “following” the course of the battles described in this volume. In some cases, the maps are actually aerial photographs of an area with symbols and wording added to the photo in text boxes. The text identifies the towns and cities seen in the image, and also the location and identity of military units of both the Axis and Allied forces. Time indicators help to understand where the military units were at various times, allowing the images to show where the military units were as they moved across the terrain seen in the image.

Many of the photographs feature the vehicles used by both the Allied and Axis forces. While these images are in black and white, the amount of detail visible in the images is outstanding, including the weathering that one would expect to see on vehicles engaged in combat.

As one would hope, there are also some images of a Then vs Now nature. Two images show the same scene, one image in black and white showing the scene as viewed in 1944, and a color image showing the same location as viewed now.

As with Volumes 1 and 2, Volume 3 is book is recommended for several reasons. The photographs are stunning. Those who model armor and those who are “figure” fans have a treasure chest of sharply focused, clear, and detailed images available to them. I am of the opinion that it is not necessary to be fluent in French to find this book worthwhile and very enjoyable.

(Thanks to Casemate and Heimdal for providing this excellent publication to IPMS/USA for review.)

Then and now comparison