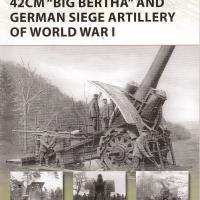 In the early days of World War I, Germany unveiled a new weapon – the mobile 42cm (16.5 inch) M-Gerät howitzer. At the time, it was the largest artillery piece of its kind in the world and a closely guarded secret. When war broke out, two of the howitzers were rushed directly from the factory to Liege where they quickly destroyed two forts and compelled the fortress to surrender. After repeat performances at Namur, Maubeuge and Antwerp, German soldiers christened the howitzers ‘Grosse’ or ‘Dicke Berta’ (Fat or Big Bertha) after Bertha von Krupp, owner of the Krupp armament works that built the howitzers. The nickname was soon picked up by German press, which triumphed the 42cm howitzers as Wunderwaffe (wonder weapons), and the legend of Big Bertha was born.

This book details the design and development of German siege guns before and during World War I. Accompanying the text are many historic photographs of ‘Big Bertha’ and the other German siege guns. Color illustrations depict the most important aspects of the German siege artillery.

The book is an excellent compilation of information, photos, and illustrations. It provides a good historical perspective on the use of siege guns and is an easy read. This is a great book for history buffs and modelers alike.

Many thanks to Osprey for providing this review copy and for all their other great references.