Allied-Axis: The Photo Journal of the Second World War 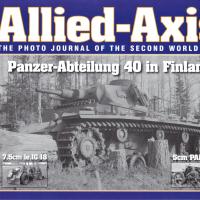 For those readers not familiar with this series of publications, they are published by Ampersand Publishing, the firm responsible for the excellent Military Models in Review (MMiR) armor modeling magazine edited by Pat Stansell, one of my favorite magazines. As the title suggests, each issue of Allied-Axis contains a number of photo journal articles covering various aspects of the Second World War. The issue under review today contains three separate articles. For the most part, each page of any given issue is devoted to a single photograph, with an appropriate written caption. Thus the detail contained in each photograph is extremely good, due to its size. For the most part, the clarity of each photograph varies from good to superb, depending on the quality of the original print used. The Journal paper quality utilized is also very good. Each segment/article starts off with a short written introduction of the subject covered, followed by page after page of photos with their captions.

To sum up, this is a first rate publication for anyone interested in obtaining good photographic references of World War Two military subjects. The photos are large format and generally to a high reproductive quality, each coming with a very informative written caption. Given the price, the “Journal” is also a steal in today’s publishing market. HIGHLY recommended. My thanks to The Ampersand Publishing Company for providing the review copy to IPMS USA.