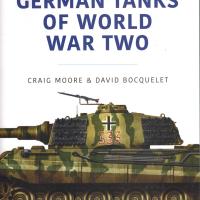 The British, and for that matter the Allied, in general try to keep abreast of the changes on the German AFV throughout the war. The changes came from field observations and reports. The books were updated as information became available through as field observations, as well as captured machines. This was never-ending reporting as changes were continuous and the Germans improved their equipment. The book contains 39 examples of German equipment used during World War II. Although the book claims to have 39 chapters, in reality we have reports on 39 different machines.

The book starts with the Neubaufahrzeung Panzerkampfwagen IV and ends with the Panzer VIII "Maus." Each chapter contains a short history of the AFV with information on where they were built, and changes as noted. At the bottom of the history page are the data/specifications pertaining to the AFV up to and including the number of types built. On the opposite pages you will find a color profile of up to three vehicles. The color profiles are very good as starting points for painting models.

The book is a very good resource for the type of AFV's used by the Germans during World War II. One thing I like is that it concentrates only on the Panzerkamfwagen. The book tries to be as complete as possible in reporting on each model. As a modeler I enjoyed the color profiles. I considered this book as a very good source of information. There is a lot of information in this little book, it is compact, and everything can be found in one single volume. I will recommend this little gem to all those that are both interested in a short story of each AFV, as well as a source of information to build a kit.

My thanks to Casemate Publishers and Key Books for allowing me to review this offering.