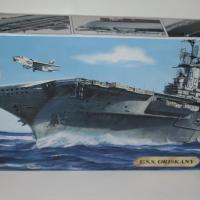 The Oriskany (CV34 ) was an Essex class carrier, laid down on May 1, 1944, and launched on October 13, 1945. She was too late for World War II, and construction was suspended in 1946. Construction was restarted in 1950. Oriskany was commissioned on September 25. 1950. She was built as a straight deck carrier, and served in the Korean War.

Oriskany went to San Francisco in 1956 for a complete refit. The wooden deck was removed and a new aluminum angled deck installed. The hydraulic catapults were replaced with more powerful steam catapults. Oriskany was recommissioned in 1959.

Oriskany served off Vietnam for six cruises. Her most famous pilot was Lt Cdr John McCain, who was shot down over North Vietnam in 1967, and was a POW until 1973. John McCain is now senator from Arizona.

Oriskany was decommissioned in 1974. She was sold for scrap in 1995, but the financing for the buyer fell through, and the ship was returned to mothballs. In 2004 the ship was cleaned out and towed off the coast of Florida, where it was sunk in 210 feet of water in the Gulf of Mexico. Oriskany is now listed as one of the 10 top wreck diving sites in the world.

When I opened the large box, I was greeted by several very large sprues with a lot of small parts. There was also the single-piece hull and the one-piece flight deck.

The first stages of assembly, steps 1 through 3, are installing the structures on the hull which will support the flight deck. Step 4 is assembling and installing the side elevators, port forward, starboard aft. The parts fit pretty well and aligned OK. Some of the parts had flash at some edges, which needed to be removed to get a decent fit. This is where the instructions call for installing the propellers and shafts. I skipped this part because I have a tendency to break parts like these while handling the model.

Step 5 is to assemble the island. As with the props, I left off the antennas and masts for later, because I wanted them intact.

I then put on the flight deck. I had some fit problems because the hull wasn’t lined up with where the connecting parts should go on the bottom of the flight deck. After I got the deck attached, I used CA glue with accelerator to get things to line up. I put the island assembly in place. I now had the major subassemblies assembled.

At this point I painted the ship. I had to do some research here, because the color listed for the whole ship, including the flight deck was “dark gray” Looking at photos of the Oriskany showed a very dark gray for the flight deck, and a medium gray for the hull and island. So I went to the internet. The gray used for most US Navy ships in the 50s and 60s was “haze gray”. And I found a web site with the FS number, which was 36270. The Army Air Force called this color “Neutral Gray”, and used it on the underside of most camouflaged aircraft during WW2. I was surprised that the Army and Navy actually agreed on something.

Painting was pretty easy. I painted a wide black stripe down the sides of the hull at the waterline. I put 2.5mm masking tape over this stripe where I wanted the waterline stripe. I then painted the upper hull haze gray, as well as the island. I then put masking tape over the upper part of the hull and painted the lower area hull red. After I had let everything dry for a day or so, I masked the island and painted the flight deck. For the darker gray I used FS30118, gunship gray.

The aircraft provided were F-8 Crusaders, F9F Cougars, A-4 Skyhawks, S2F Trackers and SH3 Sea King Helicopters. Except for the rotor blades on the helos, the planes were 1 piece models. I painted them all 36440 light gray. There were decals for all of the aircraft, and I put them on. I decided to do something a little adventurous, and fold the rotors on one of the Sea Kings. I used Greg Wise’s review of the SH-3H for guidance on how the rotors folded. I aligned one blade with the rear and cut off the other 4 blades, reattaching them with CA in the folded position.

I put a coat of Future on the flight deck and the island and put on the decals. The decals were excellent. They came off the backing sheet cleanly, and stood up to the necessary handling and nudging to get them in place. I used the Micro Scale Decal system, putting down Micro Sol and applying the decal. Then Micro Set was applied to soften the decal and make it snuggle down. The Micro set was particularly important in the stern area, as there were small bumps simulating tie downs, and the decals had to be vented pressed down to prevent air pockets. There was one area between the waist catapult lines and the white line on the deck where I just cut the clear part of the decal off after it was applied, as I couldn’t get it to sit down.

The decals were a major part of this build, taking four 1 to 2 hour sessions to complete. The decals change this project from a model to an interesting conversation piece. The (almost) straight line decals for the catapults and landing lines and the elevator edges are very colorful and attractive. I put a coat of clear flat over the decals.

I now installed the guns, cranes and other equipment on the island, flight deck and hull sides. I also put on the props and shafts under the hull. I put the antennas and masts on the island. Once again, there were flash problems with fit on some of the small parts. I then put most of the aircraft on the flight deck.

And the project was complete.

Recommended for non-beginners. This is not a new kit, so it has some of the problems we knew and overcame back 20 or so years ago. As such, it’s a good kit. It needs some attention to fit and flash, and the aircraft are a little undeveloped. On the other hand, it’s certainly a fine looking model when it’s completed, and I like having it in my display.

Thanks to Hobbico, Revell, and IPMS USA for letting me build this memorable model.