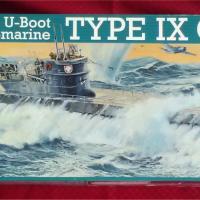 The U-505 was a Type IX C late-war boat completed in 1942 and refitted in 1943. A “hard luck” sub from the beginning for the German Navy, the U-505 was damaged in action, had a captain commit suicide, and finally, was captured by the Americans in 1944…she is now a museum piece at Chicago's Museum of Science and Industry. I went and visited her for this kit build to check details, and found only the bow section to have any rivets left showing. When I inquired as to what happened to the rest, I was told that thanks to the boat’s being out in the Chicago elements for years, they figured they’ve lost up to 70% of the hull thickness. There also were many welded-on patches to hold her together, which looked like big band-aids.

The U-505 kit comes in a large, impressive, remote control kit-size box. The spruces are packed in poly bags, and there’s a second cardboard deck about 2/3 the way up inside the box. Although the parts were bagged they were able to rattle, and I had several broken parts. There were also dents and holes on the inside of the box where parts had slid around in transit and hit hard.

The hull consists of four parts, with the rear section about one quarter the length of the front section. The fit is good, but the rear section turned out to be a little wider than the front section. The kit includes three bulkheads for stiffness, two in the forward section, and one in the rear section. All mounting holes for the ladders and rails are started from the inside, and need to be drilled out per the instructions. There are optional holes, so care needs to be taken identifying which ones to drill out. They’re numbered, so I suspect different versions of the kit are planned.

The torpedo tubes can be posed open or closed. I closed mine to make the model seaworthy, as I weight and float all my ship models. It’s the kid left in me. All diving planes and rudders can be made to operate if you don't glue them as noted on the instructions. I elected to glue mine.

The deck came in 3 pieces and fit great….and for detail, I was given and used Eduard Photoetch sets 2 and 3 on this model. Be careful in cutting off part F-174 (the bridge cap) in step 39, for I broke mine removing it from the sprues. Care must also be taken when cutting off the railings as they are very fragile. In fact, that was one of the parts which came broken when I received the kit.

The periscopes (Assy. 37) can be made to retract, as can the loop antenna (Parts F 167 and F 168)….and the radar (Assy. 39) need not be glued. Part B 123, the smaller, vertical loop antenna, may also be left to retract---you can’t see it in its down position, but a sharp tweezers will retrieve it from its hole.

The armament was nicely done for the scale but since I had the Photoetched sets, I upgraded it. The kit provides the option of mounting the guns stowed or in their “battle stations” positions. My only modification to the model was in Step 20, filing Part D 103, the rear mount for the top-loading gun, so it would line up parallel with the other gun. I chose the stowed position for mine.

The props and their shafts will also rotate if desired. The instructions feature a good sequence to assemble them, but I left off the guns and props until last. Rigging is supplied in the kit as a fine thread, but after looking at my type VII U-Boat which was done with that thread, I decided to use fishing line instead.

The decals are right in register, supplying markings for U-505 only, and consist of markings for the conning tower, stand, and hull depth markings. All fit well for me except the forward hull markings….they have two spaces in them for the limber holes and could have lined up if I’d made my water line an eighth of an inch higher.

There are also adhesive-back paper flags included, both US and German, but the German ones are missing the swastika. Overall the fit of this big kit was great and you will have one menacing-looking vessel when finished.

Thanks to IPMS/USA, Revell Germany and Hobbico for the opportunity to review this subject.

Conning Tower from Aft
Previous Next