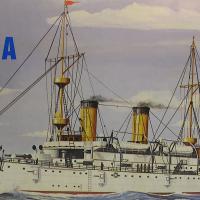 The USS Olympia was a protected cruiser launched in 1892 with a long and distinguished career that included being Commodore George Dewey's flagship at the misnamed Battle of Manila Bay. Misnamed because it wasn't really a battle. The Spanish squadron never left anchor and the Americans just cruised back and forth shooting them up, even taking time for a lunch break in the middle of the action. She was a flagship in WWI, escorted transports across the North Atlantic and participated in the allied intervention in the Russian Civil War at Murmansk. She brought the remains of the Unknown Soldier from WWI back to the United States and served for a while as a training ship, but was finally decommissioned in 1922. She has the honor of being one of the only ships from this period still afloat along with the Mikasa in Japan and the Aurora in Russia.

There are two injection-molded kits of the Olympia on the market. One is by Revell and dates from the 1960's. The other is this one, which is similarly aged. However, that's where the similarities end. The Lindberg kit is actually a re-release of the Pyro kit and Pyro had a very different take on plastic models. Pyro was already a successful company with a wide range of injection molded products and plastic models were more of a sideline. Their models were made to generally look like their subjects, but no special effort was put into making sure every detail was correct. In addition, production was simplified by molding many details onto kit parts that may have been separate in other companies' offerings. Anyone who is at all familiar with Pyro knows that they released kits of some pretty esoteric subjects, especially for the time they were released. That brings us to their Olympia.

Originally there were two kits based on these molds, the Olympia and the Maine. The two kits were identical with a few clever exceptions. In the Maine kit, two sponsons were provided to glue to the hull sides to enable the turrets to hang over the sides as they did on the Maine and the funnels were re-arranged so they were closer together. There were a few other differences, but the result was something that looked very little like the Maine. This kit was dropped after a while, but the Olympia continued.

The current release is actually from Round 2 Models out of South Bend, Indiana. They have purchased the rights to AMT, Polar Lights and now Lindberg models and are re-releasing select kits, mostly automotive subjects, in their original packaging. If you don't look closely, you would not know that Round 2 is even involved as their name only appears in small print on the box. The model is in white styrene and has 78 parts. Now, this is a ship kit with only 78 parts. I've done small-scale armor that has that many parts in just one side of the suspension! Much detail is molded in such as the anchors, ladders, piping on the funnels, and all deck detail. The ship's boats are mostly molded in two parts with one part molded right to the davits, which are molded as part of the superstructure. The thwarts meet in the middle, which makes for a tricky seam to fill in the bottom of the boat as well as that of the thwarts themselves. The two smallest boats are only three quarters molded. The inner hull halve is sacrificed to avoid what were then molding limitations. The main hull is in two halves that generally fit well, except you have to be very careful to get the two halves to be level on the bottom. I was and I still had to use putty to fair it all in. The main deck is in two halves with the usual seam in the middle for such decks. However, in this case, the seam is in a place where very little of the deck shows, so it's not a problem. Fit is pretty good, but there is a large gap at the rear where the deck does not meet the hull and a small gap at the front. The front gap was easily filled with a little acrylic putty but the rear one is about an eighth of an inch wide and needs shims and filler putty. Due to the age of the molds, there are many mold seams and considerable flash to clean up. As a matter of fact, one of the crows' nests on the masts was almost completely flashed over and another was molded solid on one half. Railings are molded onto the main superstructure, but not on the main deck. Overall fit is ok, especially considering the age of it all, although the stand provided is pretty rickety, and so I added a strengthening strip in the back.

Painting requires either a lot of brushwork on the deck "furniture" or a lot of masking. I went the masking route and went old school and used discount store spray paints, a flat grey for a primer, a generic tan for the decks and then flat white. I couldn't get into all the nooks and crannies with the rattle cans, so I did the last coat of white with my airbrush. Then the masts and funnels were done in a home brew mixture of yellow ochre with black top sections. As the railings are molded to the upper decks and are solid, I tried a trick to make them look better. At this time, it was common for the railings to be covered with canvas, so they looked solid. I painted the inside of the railings tan to simulate canvass and then painted the "voids" on the front where you could see the canvass through the railings the same color. You tell me how it looks.

Provided in the kit are a set of stickers you have to moisten including a name plate for the stand, the shield for the bow and a set of flags. They even give you a spool of black thread for the rigging and a rigging diagram. However, if you are going to rig this kit, you need to plan in advance. The rigging diagram shows lines going to places where there is nowhere to attach them, so you'll need to drill some holes to accommodate the lines.

If you want the definitive Olympia model, this isn't it. If you want a reasonably priced ship model to build with your kid and not be bothered by the mold seams, flash, etc, and maybe teach a little history, then this is the model you want. Or maybe it could be just something to put on a shelf as a decorator piece. Either way, it's nostalgia in a box.

Thanks to IPMS/USA and Round 2 models for providing this review copy.