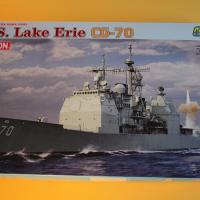 USS Lake Erie (CG-70) is a Ticonderoga-class guided-missile cruiser of the United States Navy, named after the U.S. Navy's decisive victory in the Battle of Lake Erie during the War of 1812. She is the first U.S. Navy ship to be commissioned in Hawaii. The USS Lake Erie is a baseline 4 Ticonderoga class ship, with integrated AN/UYK-43/44 computers (in place of UYK-7 and UYK-20) and superset computer programs originally developed for the Arleigh Burke-class guided missile destroyers. The Lake Erie also has an improved UYS-20 data display system and various decision aids, as well as the SQS-53C sonar and the SQR-19 sonar data processor.

The kit is produced by Dragon Models, a well-known company who is known for producing quality mid-range priced model kits. The box art work in outstanding and shows the USS Lake Erie at sea launching a guided missile from the stern launchers. The kit can be built only as the USS Lake Erie. This kit belongs to Dragons 1/700 Scale Modern Sea Power Series Premium Edition series.

The kit consists of 130 parts and comes on five gray sprues, one photo etch sheet, and one sheet of decals. The parts are nicely molded with no flash what so ever. All panel lines are engraved and all the sprues have small gates. The 8 page instruction sheet shows the suggested assembly through 20 steps starting with the super structure, and progressing through the hull construction assembly to the final installation of the photo etch railings. The construction process is the same for both water line and full hull options.

This kit is a high quality CAD/CAM designed kit so the fit is outstanding! I chose to build the full hull, which fit together with no filler required. The construction assembly starts with the construction of the superstructure. Since all pieces are separate if helps if building on a level surface so that the structure remains square. You build the full superstructure and then glue it to the main deck. If the superstructure is not square you will definitely notice it when fitting it to the main deck, which may require some sanding on a level surface in order to make the fitting square. One nice option here is that you can build the helicopter hanger with either the doors open or closed. I chose to build it in the open position. Next you can decide whether to continue the build as a waterline model or a full hull.

I had no problems with gluing together any of the remaining assemblies and did not have to use any filler at all. But there are many small highly detailed deck, antenna, gun, and radar parts which require the use of tweezers and a large magnifying glass when installing them on the model. The tiny parts are very detailed and fit exactly. There is a helicopter provided for the helipad molded in grey plastic.

There is a sheet of photo etch provided for the railings and for the radar masts. The PE for the railings has to be bent into the correct shape, but there are indications on the PE where to bend. You just need to test fit it to get the proper angle. The PE for both of the radar masts and antenna are included in this kit. The PE radar mast comes as one piece and you have to fold it into shape to construct both the forward and aft tripod masts. I totally destroyed both when attempting to construct them. So in the end I used the plastic parts to construct both masts, which looked fine.

I painted the overall ship with Tamiya Haze Gray and the deck with RLM 74 Dark Gray, then masked and painted the underside of the hull with Tamiya TS-33 Dull Red. The funnel was painted Tamiya Flat Black, and the helicopter was painted a lighter gray.

Overall the kit is a joy to build and builds into a handsome ship! The fit and detail is outstanding with no filler required.

My thanks to Dragon Models, and IPMS USA for the opportunity to build this great kit. I look forward to building more Dragon kits in the future.