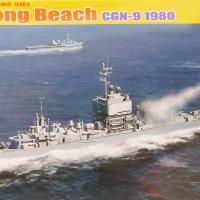 This is the third Cyber-Hobby ship model that I have been privileged to build for a review (the others being the USS Chicago and the USS Virginia), and I will say that this was the most challenging of the three. There were a couple of complications due to my choice of building the full hull version, and there were some challenges obtaining a few of the necessary small parts. Still, the kit builds up into a very nice representation of the USS Long Beach (CGN-9), and I would recommend it to those wanting to add this fine ship to their collection.

The USS Long Beach (CGN-9) was a ship of firsts and lasts for the US Navy. She was the first nuclear-powered surface warship in the world, the first cruiser since the end of WWII designed and built new from the keel up, and was the first US Navy ship equipped with guided missiles as the main armament. The two five-inch guns were added at the request of President John F. Kennedy after he visited the ship in 1962. The ship, when completed, possessed the tallest bridge in the world, and she was the third US Navy ship to carry the name “Long Beach.” She was the last warship to be fitted with teakwood decks, and future cruisers would be built on the platforms of destroyers and frigates.

The ship was ordered as CLGN-160 (Guided Missile Light Cruiser, Nuclear powered), but the designation changed to CGN-160 (Guided Missile Cruiser, Nuclear powered), and later the hull number would change to CGN-9. Built by the Bethlehem Steel Company Shipyard in Quincy, Massachusetts, the USS Long Beach had her keel laid down on 2 December 1957, was launched 14 July 1959, then commissioned 9 September 1961, and was decommissioned 1 May 1995. The ship is currently located at Puget Sound Naval Shipyard in Bremerton, Washington as it continues to be dismantled as scrap. The ship displaced 17,500 tons, was 721 feet long, 73 feet at the beam, had a draft of 30 feet 9 inches, and with her crew of 1160 officers and enlisted men could travel at up to 30 knots from the power of her two Westinghouse C1W nuclear reactors.

The most famous cruise in the storied history of the USS Long Beach is likely that of Operation “Sea Orbit,” when she, along with the USS Enterprise (CVAN-65) and USS Bainbridge (DLGN-25), formed a part of the first nuclear task group in 1964, which circumnavigated the globe. During a fifty-eight day stretch, the Long Beach travelled over 30,000 nautical miles at an average speed of 25 knots without refueling or taking on supplies. The ship also took part in one Mediterranean cruise and nine Western Pacific cruises while active.

This release from Cyber-Hobby represents the USS Long Beach, as she appeared in 1980, so likely when she was on a Western Pacific cruise between January and July, as the ship entered a refit from October of that year until March of 1983. Armament consisted of two twin Mk 10 Terrier launchers, an ASROC (Anti-Submarine ROCket) launcher, two five-inch 38 caliber guns, and two triple Mk 32 torpedo tubes. Additional Mk 141 Harpoon missile launchers are provided for the aft deck, but with no corresponding holes on the deck; I left them off.

If you check out the box before you open it, you will notice the words “This kit contains over 180 parts,” and I am going to take Cyber-Hobby on their word. Unlike my last Cyber-Hobby kit review, this kit will leave the builder with less than twenty unused parts for their spares box. The plastic is similar to the medium gray product you will find in a Dragon kit, with a slight texture being present on many of the moldings. Aside from the base, and upper and lower hulls, there are ten sprues holding the parts. Since the advent of slide mold technology, the model ship industry has benefitted from better detailing such as open gun barrels for the five-inch mounts. The photo-etch fret contains twenty-seven items, the majority of which are ladders and stairs, although the option to build masts and their platforms for the rear bridge are present as well. The decal sheet is small with markings for only the USS Long Beach, and many of the decals are within the larger circular decals (safety line designators around the weapons) on the sheet.

For some building tips, in step three, the cutouts were all covered over for I1 (there are a total of four installed) on part C6, but only the outer section is covered, and this is easily removed with a hobby knife. In step five, there is no locator hole in part D27 for F2, and if using the PE masts and platforms that attach to the forward portion of D47, you will need to take the RADARs from F3 or F2, as there are only two G6 parts and four are called for. In step seven, there are no locator holes in C18 for G19, so I attached G19 to G23 instead. In step eight, parts D40 and D42 need swapped on the port-side “N” subassembly, and if you want to install H1 and H2 on the aft deck, you will need to open holes prior to gluing the upper and lower hulls together.

If building the full-hull version, be prepared to spend some time getting the upper and lower hull to fit correctly together, as my sample required some light filing to get the bow area to fit. On my sample the fit between the hull halves was not as crisp as I have experienced in the past, and if I had not painted them separately before gluing the halves together I would have spent additional time improving this seam. Finally, although I have not had previous issues with building full hull ships with similar bases, on my sample the pegs, when attached to the base and the ship, canted inward at the base, requiring me to elongate one of the base holes to correct the fit.

To finish my kit I utilized Model Master Acryl Haze Grey, Gunship Gray, Anti-Fouling Red, Aircraft Interior Black, and Semi-Gloss White. I also employed the use of Vallejo Old Gold and their Model Wash for grey and dark vehicles, as well as Alclad Gloss Black Base and Old Gold. The decals separated from the paper without issue, and Micro Set and Micro Sol were used to set and fix them into position. The overall dull finish is courtesy of Micro Flat.

As far as my hits are concerned, the detail for this 1/700 scale ship is simply amazing. The photo-etched items are a nice upgrade for the plastic parts that they replace, and are a necessity for the ladders and stairs. I even felt that the miniscule missiles, ASROC launcher, and torpedo tubes had outstanding detail for this scale. I also like the presence of thinned folding edges on the photo-etched items, which helps to identify where to make the bends, and keeps them consistent. Whether it was based on an early review of mine or not, I like the fact that both the port and starboard sides of the ship are shown in the Painting & Markings page, along with fore, aft, and top views, even though the paint scheme is not complex. Finally, a big shout out to the folks at Dragon Care as they quickly turned around a new set of decals for me after mine set sail for uncharted territories. Yes, of all the things that I have lost over the years, it is my mind that I miss the most.

In regards to my misses, there were issues concerning the locating holes in various parts. The directions are good for guiding some to be opened, but I ended up not installing three parts as there were no clear attachment points, and I had to elongate a hole in the base to display the ship properly. I built up one of the RADAR arrays that attach to the five-inch guns, and it looked out of scale to me. Although the bottom of the box shows CAD drawings for five-inch gun barrels with and without blast bags, only those without blast bags were present in my kit, and the directions did not present an option. Finally, I would have liked to have seen the teak deck sections shown on the Painting & Markings page, as they were a unique feature for this ship.

In conclusion, I would recommend this kit to anyone wanting to add the USS Long Beach (CGN-9) to his or her collection. I would however recommend this kit for more experienced modelers due to the small parts, especially if removing parts from other parts (as I did for two RADAR sets). The photo-etched part used for the large RADAR arrays for the five-inch guns, were challenging to build, and as I could not make these out on any of the reference photos that I found, I decided to leave them off. The small RADAR masts that can be used with the PE platforms may also challenge those with limited experience with photo-etch parts.

I would like to give my thanks to the folks at Dragon Models USA for providing this kit to the IPMS/USA for review, to Dave Morrissette (who runs the review corps with the assistance of some great volunteers) for selecting me to do the build, and to you for taking the time to read my comments.

Base Peg Hole Elongated to Fix Peg to Hull Misalignment

Turret and PE Compared to CAD Drawing - Side View