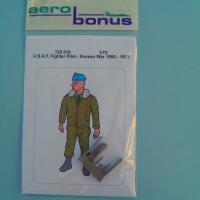 Aero Bonus is the figure line from Aires. They do several figures ranging from 1/72nd to 1/32nd. This 72nd scale guy, as the name implies, is a USAF Fighter Pilot during the Korean War. You could also use it with any other USAF jet from the early 50’s and probably into the 60’s. He is depicted wearing khakis and what I think is a B-15 Flying Jacket. He is topped off with the standard Garrison Cap.

The figure is cast in 4 grey resin parts on one mold block, a body, two arms and a separate head. The parts are perfectly molded with just a slight seam to be removed from the inside of the legs.

There are no assembly instructions but it is pretty obvious where things go. A generic paint guide is provided basically telling you to paint him olive with a blue hat.

I used superglue to put him together and then mounted him on an old Microweld bottle so he would be easier to paint. Also noticed he is a little short scaling up to approximately 5’ 3”.

I used Vallejo paints on him Flat Flesh for the basic skin tone with a brown wash and Basic Skintone highlights. His shirt and pants were done in US Field Drab also washed with brown and I used Intermediate Green for his tie. I did some searching on the web for color options, especially for the jacket and looks like the B-15 can come in Olive or Blue. Being he is an Air Force guy I decided to go with the blue for the jacket and flat black for the fur collar and waistline. I used Dark Prussian Blue for this and the same color for his cap. The jacket was washed with black. Finally, the boots were done in Flat Black.

For display purposes (and photography) he was mounted on a wargame base with a tarmac cut out.

All in all, a nice little figure which will add scale to your early jets or look good mingling in a diorama.

Thanks to Aires and IPMS/USA for the review kit.

Pilot Back
Previous Next