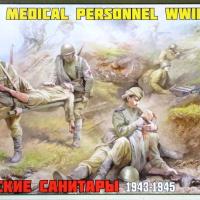 These figures come on a sprue with 44 parts. The illustration on the box front is an approximation of the 5 figures. There are significant differences in the poses of the two wounded soldiers and the female medic. The computer-generated picture on the back of the box is an accurate representation of the figures.

This set had very minimal flash and no ejection pin marks. What mold lines found were easily removed with a sharp blade. There are no decals, and the painting instructions are just for the major items. The paint colors are coded only for Testors.

I constructed them using a Tenax type of glue. This softened the plastic enough that, as pressure is applied to the joint, some dissolved plastic will ooze out. After it hardens, any excess can be cut or sanded away. I used very little filler. The fit was acceptable and little adjustment was required to get the proper poses. However, care is needed to get the hands of the female medic into proper position. I suggest that you finish the wounded soldier first and use him to help get the hands of the medic into the proper position. After you get the hands into the proper position, you can slide the wounded soldier out for painting, then replace him when done. The arms of the two litter bearers are molded to the litter and some minor adjustments will be necessary to ensure both figures are lined up correctly and in balance. The wounded soldier with the female medic has two different hands – one is molded to the weapon, and the other is separat from the weapon, but the weapon can be loosely fitted to the hand. One nice touch is that the litter bearers have weapon straps that are molded to the weapons and match the straps on the figure. No more magic weapons just hanging on.

Conclusion – This set is a well done and welcome addition of medical figures to the European theater of World War II. Highly recommended.