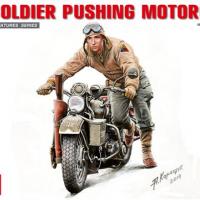 The Harley-Davidson WLA motorcycle was nicknamed the 'Liberator' because it was used by U.S. soldiers liberating occupied Europe. Harley-Davidson began producing the WLA for the U.S. military in 1940, later entry of the United States into World War II saw significantly increased production, with over 90,000 being produced during the war. The US Army motorcycles were used for police and escort work, courier duties and scouting. They were almost never used as combat vehicles or troop mobility, it was a single-rider design and rarely equipped with sidecars commonly found on the German motorcycles.

According to Wikipedia the model designation breaks down as follows:

My sample arrived in the standard MiniArt box, the box is very sturdy and art is nicely rendered. The kit contains; 161 highly detailed plastic parts on one medium sized gray sprue for the motorcycle, a small size gray spue for the figure and a smaller clear sprue for the windscreen, headlight, and speedometer lens. A small photo-etch fret is also included that provides the brackets, spoked rims and other delicate items. A small decal sheet contains two options and includes the speedometer dial faces and placards. Lastly a fold out instruction sheet, printed in color, it’s well planned and easy to understand.

First, I’ll cover the motorcycle build and then quick follow up with the figure. The instructions start off with a little photo-etch work, beginning with the spoked rims. They must be carefully removed from the fret and cleaned up. There are two halves per rim and the kit supplies a compression jig to form the proper shape of each half. The compression jigs are simply plastic male and female discs used to sandwich the brass part. These things worked perfectly. The brass pieces are extremely delicate and you must align each half perfectly to each other and then add the hub. Step two has yet another jig, this one is for the front fender mounting brackets used for the Thompson machine gun holster on one side and a utility box on the other. These part will be used later in the build. The tires were next, each one is made up of three sandwiching pieces and result is very convincing. Using extreme care I inserted the brass rims into the tires but first, I sanded the opening up slightly to avoid damaging the delicate brass. The rims must be centered perfectly inside the tire.

At step five we’re shifting gears and then proceeding to the frame and engine work. This consumed the next seven steps before the rear tire and fender were added. The next eleven steps covered the gas tank, seat, saddle bags and plenty more smaller parts. All the while more brass pieces were attached in various places such as the shifting lever, kick stand catch, tail light bracket and other small bits.

Finally, I was seeing a light at the end of the tunnel in what had become a tedious but rewarding build. To explain what the ‘Springer fork’ is; it’s basically two pairs of forks. The forks are pivot linked together, the forward spring fork attaches directly to the wheel while the rear fork attaches to the frame. The large springs allow the forward fork to act as a shock dampener.

So I attached the two forks together and added the front fender and let the glue dry before moving on. The front wheel went on next followed by the brass brackets I formed up in step two. The Thompson machine gun holster and a utility box were then added to those brackets next. The headlight and a few more do-dads were glued on and it was ready to attach to the frame. This turned out to be easier than expected. The handle bar is the key to holding this delicate assembly onto the frame and must be added in unison. After that, a few more bits were attached for the completion.

The figure is made up of twelve pieces and builds up easily, however I recommend test fitting your figure with the motorcycle before the glue sets.

Mini-Art, Dragon USA and IPMS for allowing me the opportunity to build and present such a fine outstanding model. I highly recommend this gem to the seasoned modeler, I rate it a 9 outta 10 on the Greg-O-Meter.