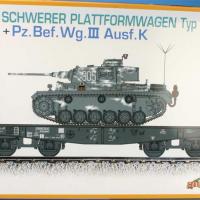 The Orange Box Series from Dragon are basically previously released models that have been repackaged. This particular kit is a combo of the Dragon 6069 Schwerer Plattformwagen Typ SSY railcar flat top and the Dragon Kit # 9018 Pz Bef Wg III Ausf K

There is nothing provided for tow cables.

The instructions show two paint schemes, Panzer Grey and Panzer Grey with a minimal white wash camouflage. The decals are done by Cartograf of Italy and are in good registration.

This is a very good model. The molding is well done. No flash and other than the road wheels, very faint mold lines. As with most Dragon instructions, be careful. Check and recheck, dry fit multiple times before adding glue. The lack of tow cables and other minor pieces is somewhat puzzling. If you want, you can combine this kit with others and make a complete train of loaded cars headed for the front. What a diorama possibility!