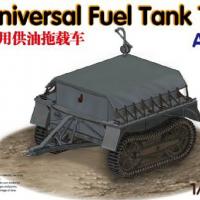 The trailer depicted here is my research is correct is a Renault UK trailer that is in captured German service the trailer were used and obtained during the fall of France, about 3000 UE and UE2s had been captured by the German Wermacht.

Let me start by saying this was a fun build. It started out as an in box review but the model looked so cool it ended up getting built. You start by assembling the suspensions and the running gear. Do not glue part Ga 5to the leaf springs this will allow you to tip the trailer later to suit which ever vehicle you are going to connect it to. I also did not glue the road wheels bogie units to Ga 5 until after the model was assembled and again was to allow the trailer to pivot as mentioned.

There are a few rivets to remove in step 3 which is easy enough. The tracks are link and length and glue around the road wheels. The tracks have the characteristic track sag molded in which was nice.

When you assemble the fenders and trailer details in steps 5 and 6 there are some very small photo etch details that really test your patients and skills but look great once on.

Step 7 to 11 are the assembly of various cargo loads from a single large fuel tank with pump on top to a variety of jerry cans and fuel drums. I did not assemble any of these as I am lading my trailer with crates and boxes from the value gear line.

I painted the trailer in a three tone camouflage using Tamiya Dark Yellow, Olive Green and Red Brown. Once completed I then over spryed the entire model with dark yellow to tone down the camouflage and give a work look. The road wheels were detail painted with Vallejo Dark rubber and the tracks were painted with Tamiya hull red and the covered randomly with Mig pigments of old and new rust. Washed of van dyke brown were applied and once dry the model was given a coat of Testors dull coat. The fial step was to dry brush with buff titanium.

This is a highly detailed model that assembled fairly easily considering the number of minute and fragile parts. This would not be a good choice for the novice modeler due to the small photo etch and fragile plastic parts I recommend this kit and it does make a very interesting addition to your panzer.

Thanks to Bronco and Dragon USA for providing the kit, and IPMS USA for allowing me to review it.