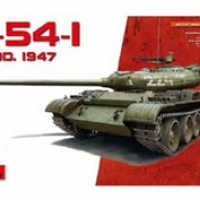 I've always had a fascination for the Russian T-54/T-55 series and have been building models of it all my life, beginning with the ancient Tamiya T-55 from the 1960's. As each new incarnation came out, I leapt on it eagerly, including the Lindberg kit, the AMT/ERTL kit all the way to the latest Takom offering.

MiniArt has been expanding its armor stable dramatically lately, with the release of a number of kits on these ubiquitous vehicles, both with and without full interiors. The T54-1 marks the transition of Russian armor development from the the T-34 through the T-44 and rather looks like a transition, with a number of aspects shared with its predecessors.

As stated before, MiniArt is offering most of these new kits either with or without interiors, and I must confess I was glad to get the simpler of the two, as this version has almost 1,000 parts as is. And this is a relatively small tank! The box comes crammed with relatively soft gray plastic sprues, a clear sprue for windows and lights, a very extensive photoetch sheet, a small sheet of decals and a lovely assembly booklet with color renditions of all the marking choices available. The one thing that may slow you down (as it did me) is the very number of sprues, coupled with the fact that most assemblies require you to fish around on several to find all the relevant parts. You might want to more clearly mark all these sprues in some fashion to reduce the search efforts.

On the plus side, I doubt you will ever find another rendition of this particular beast with more detail. Even minus the full interior you get working torsion bars, opening hull bottom hatches, a driver's hood, both open and folded . . . well, the list goes on and on. This is not an overnight project.

I began by doing a quick assembly of the hull bottom and sides, which are made up of flat plates that fit together remarkably well. Although they offer a few bits and pieces of the hull interior in this version, I opted to include only items that would help the build integrity. My recommendation is to NOT rigorously follow the sequence of assemblies, but to handle the larger assemblies first, and then adding the surface detail.

My first goal to was complete the entire drive train, including wheels and tracks before moving on, as if there's going to be a major problem with a kit, this is where it tends to lurk. The very nicely detailed wheels were still a somewhat loose fit on the axles and I spent some time making sure that they were all touching the ground evenly before proceeding. The working torsion bar suspension was more than a little flimsy, due to the nature of the plastic, and I wasn't looking for bells and whistles – just a solid foundation for the tracks.

The tracks are single link – my favorite type, but each link was attached to the sprue with either four or five channels, necessitating a great deal of cleanup hampered by the fact that the sprue attachment points weren't limited to one plane of the track links. Even so, it took me about a half an hour to remove all the links from the numerous sprues, and another hour and a half in front of the tube carefully cleaning all the bits off each one. The instructions make it clear that there is one toothless link for every eight regular links, for some reason. You'll want to follow this pattern or you might find yourself coming up short. However, I had no trouble with this part of the build as the tracks fit together and over the sprocket wheels very nicely.

After completing this I could now put my full attention on detailing out the hull. I made relatively few alterations to the instructions – replacing the fuel tank straps with flattened solder as well as replacing the plastic tow cables with twisted solder. There is only one error on the kit that I could find, and that had to do with the glacis plate. The T54-1 came with two MGs mounted in their own boxes on the fenders. However, the kit plate includes the tiny hole for the fixed MG fired by the driver in later versions. This was a quick fix with a dab of superglue.

The only place on the kit where any putty was used at all was to fill in the small spaces around the two front plates, which quite cleverly mimic the interlocking nature of the real plates. Other than that, there wasn't a gap on the model anywhere. Now I could turn my attention to the turret.

The turret comes with a fairly complete interior, most of which won't be visible upon completion. On the other hand, I was really impressed with the level of detail on the hatches, which both feature exterior and interior detail with nary a pin mark among them. The main gun comes as a lovely single casting. The only place on the turret where I encountered potential difficulty was with the main gun mount, however, which didn't have a lot of glue surface. I remedied this issue by gluing the two halves of the turret together first and then inserting the main gun, which now had surfaces on both top and bottom to hold it. Otherwise, main assembly went without a hitch.

A note here – the handrails for the turret are scale thickness, which makes them flimsy to begin with. The fact that each is attached to the sprue at eight or nine points makes them even harder to contend with. Although I used the kit items, if I were to do this again I'd probably replace them with wire.

The kit includes a beautifully detailed antiaircraft gun which simply proved too much for me. After losing two pieces to the Carpet God and breaking a third, I knew this was one detail that I wasn't going to be able to add. Fortunately, my examination of pictures on the internet showed that quite a number of these vehicles didn't have the additional MG, so I don't feel quite as bad. Not quite.

Final assembly was completion of the driving hood – the only company to provide this – and then on to painting. I selected the most interesting scheme to my eye, and completed the work in the course of a single session in the workshop. The final product really does look unique – like no other T54/T55 I've ever made, and the level of detail is truly amazing. If you are willing to take your time with assembly, this may be one of the most attractive additions to your Russian armor collection you can make.

My heartfelt thanks to MiniArt for taking a chance on such an esoteric vehicle, and to IPMS/USA for a chance to get my hands on this beauty.

Closeup of driver's periscope and front of tank

NIce shot of rear showing all of the surface detail

Right side of turret

Left side of tank
Previous Next