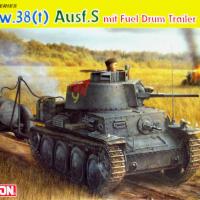 The model is made from injection molded plastic, gray in color. The plans were made up in book form, printed on both sides. Decal sheet, photo-etched, cable and hose, as well as simulated glass parts were included.

I started with the lower portion of the tank body, adding running gear and springs. Next, the back and front cover plates, with details, hooks, and exhaust system were added. I pre-painted, as the assembly progressed. Next came the interior details, seats, transmission, and drive shaft, with pre-painting as the assembly progressed. The overhead cover was added next, with machine guns, turret, cannons, and ammo storage container. The tank treads were then assembled to the body. I then assembled the fuel trailers – note: there were enough extra parts for a second fuel trailer, with the exception of the wheels, axles, barrel, and barrel straps. These items were scratch built.

The kit went together well. The kit is for the more experienced builder, as there were many tiny and fragile parts. I would like to thank IPMS and Dragon Models USA for allowing me to build and review this kit.