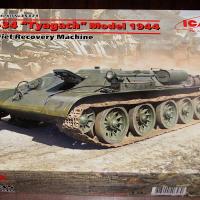 The WWII Soviet T-34 is one of the most recognizable tanks out there. There is nothing about the T-34 that I can tell you that you probably don’t already know.

ICM’s newest release is something that you don’t see too often, and to my knowledge is the first time this variant has appeared in kit form. The ICM #35371 1/35 T-34 “Tyagach” Model 1944 Soviet Recovery Machine. This kit represents the ‘tractor’ version of the T-34 – made by replacing the turret of a damaged tank with a welded plug/hatch. These vehicles were used for towing and recovery operations during the World War II.

The kit comes in a nice study inner box with a hinged lid. The colorful box top comes off from that and has the typical printed information. Inside, this kit has six trees plus the upper and lower hull molded in green, one clear tree, four vinyl track parts, and two vinyl tow cables.

Kit parts come in a plastic bag, with the two “C” sprues with the smaller parts wrapped in their own protective padding. The clear tree is in its own bag, as are the vinyl parts.

The two “E” wheel sprues and the two “C” sprues are from their earlier T-34 kit #35365 while the turret sprue is from kit #35366 (yes you have all the parts you need to make a tank with the turret in this boxing.) New to this kit is tree “H” which contains the turret plug and a single hatch handle.

There are no markings shown and thus – no decals are included with this kit.

There are a fair number of extra parts in this kit which will be nice for your spare parts box.

The instruction booklet is also very well done with a glossy cover and sturdy inner pages. Diagrams and parts callouts are very well done throughout. Tamiya paints are referenced.

Assembly starts with the upper hull for a change. The plastic feels soft compared to what I am used to working with, but it posed no issues. I used Tamiya’s Extra-Thin cement for the build, and it worked fine. Exterior detail is very nice throughout the kit, but there are minimal interior parts included (two seats and controls, as well as some hatch detail). So, unless you like to scratch-build or have lots of spare parts already – most will likely build this closed up.

I did notice one thing in this kit which I don’t see too much any more: There is some minor flash on some parts. Very minimal mind you, but there were a few spots I had to work with a little. The lower hull has a small plug in the center which needs some attention, and there was an injector mark on the driver’s hatch that I needed to fix. Assembly is very straightforward, and the fit was very good throughout the build. As you can see from the photos, there were no major issues I encountered. The left hull joint is my fault as I took off the pressure before the glue had fully dried and it separated just enough that I felt some correction was in order.

The kit was painted with Tamiya XF-58 as called out in the instructions.

In my opinion, by far the worst part of this kit are the tracks and vinyl tow cables. Each side has two track links that must be glued together. The diagram on the directions show two different sized track sets, but all four included with this kit are the same size. There is a good amount of ‘flash’ on all these vinyl parts as well. I cut as much off as I could with an X-Acto and tried to sand the rest with a course sanding stick. The two tow cables had the worst amount of this flashing, but were slightly easier to sand. There is no mention in the directions on how the builder should cement these track link parts. Tamiya Extra Thin Cement had no effect on them. Weld-On 3 also did not work. I used some superglue and that offered at least a little hope – but the joint pulled apart with ease. The only thing I found which would grip the two halves together and offer some strength was the tube of G-S Hypo-Tube Cement (Watch Crystal glue) which I normally use for aircraft canopies. I assembled the road wheels and tried to attach the tracks over them –they pulled apart each time. After several attempts at trying different ways and a few other glue combinations – I finally gave up and simply put a staple through the two track sections to hold them together.

The tracks are well detailed and look nice once completed, however. If I were to build another one of these kits, I would look elsewhere for tracks and tow cables to avoid the heartburn.

The finished kit was weathered with several shades of Tamiya’s Panel Line Accent Color, which left a semi-gloss sheen, and then a minimal amount of dry brushing was done to bring out the details.

I certainly recommend this kit to anyone interested in the subject. The kit offers some great detail and assembles with ease. I’m not a T-34 expert, so I cannot speak to the shapes and variations being accurate – but this was a fun and enjoyable build. Pick one up and add something a little different to your display case.

Thank you to ICM for the review sample and to IPMS/USA for the chance to build the kit.