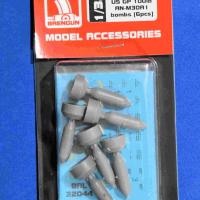 Brengun continues to release wonderful aftermarket add-ons to enhance 1/48th scale planes. In this set, there are six complete AN-M31A1 100 lb bombs which were used by fighters, bombers, or attack aircraft. They were in use for a long period of time and covered WWII to Korea and further.

Inside the package are six perfectly cast bomb bodies in Brengun’s dark gray resin. Simply cut from the pour block and you are set to add the photoetch. There is a complete photoetch sheet which has the bomb fins, the nose fuse and the rear plate and tail fuse. You will need a 0.5mm rod to add the tail fuse also. Lastly, the decals are included and have the nose and tail yellow bands, marking for the tail and two for the body. The decals are crisp.

The only tricky part of assembly is the fins, which have 12 folds in them. A photoetch bender here really helps. There are 8 folds and create the legs that attach to the bomb body. The remaining folds give the fins their shape. After some tinkering, I got the tail to look OK, but I did need to trim the attachment points slightly when adding to the bomb.

I added the PE plate to the back of the bomb but left off the arming spinners until after paint. Painting is simple to start with gloss Olive Drab being used. Once dry, I added the decals using Microsol with no issues as they snuggled right down.

Once dry, the nose fuse was painted silver and the nose fuse added. I cut a small piece of syringe and added it. I little black wash and a flat coat and we have a bomb.

There are wonderful, with my only caveat being the folding of the tail assembly. You could also detail these by adding the fuse wire harness for even more detail.

Recommended. My thanks to Hauler Brengun for the review sample.