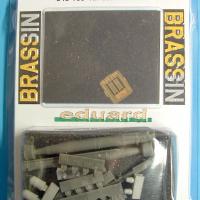 The KH-25ML is a Soviet/Russian LASER guided surface to air missile, designated AS-10 Karen by NATO. Its primary use was/is against hardened targets like fortifications, bunkers, or armor. In Afghanistan Su-25 crews started employing the weapon in the mid-80s to try to collapse cave entrances used by the Taliban. The CEP is cited at 4 meters. In addition to the Su-25 other Soviet era strike aircraft such as the MiG-27 Flogger, and Su-17M and Su-22M Fitter carried the weapon. These aircraft used nose mounted optical target tracking sensors with boresighted laser designators, for self-designation. While superseded by newer weapons, it can still be found in the inventories of many former Soviet states, Warsaw Pact countries and client states.

The KH-25ML is an important weapon from the Cold War and post-Soviet era and it is good to see Eduard make a quality replica available to modelers of 1/48 Soviet aircraft. This is a multimedia package with resin components, gray and clear, PE and decals. As we have come to expect with the Eduard Brassin Series, the quality of detail and castings are first rate and the resin is very durable. Nothing in my set was damaged from shipping and little cleanup was required.

Assembly is rather simple and straight forward. Before starting, decide which configuration to build the missiles. Eduard provides the option of an exposed seeker head cast in clear resin, or the nose with the protective rubber cover in place. I opted for the cool look of the exposed seeker head since the clear resin was quite clear. In the instructions, Eduard calls out how far back on the missile body to cut to accommodate the seeker head. I used a Tiger micro saw by JLC (distributed by UMM-USA) to make this cut and to also separate the missile fins and tail cones from the pour blocks. I attached the seeker with CA. The tail cone is also provided as a separate piece and with minor sanding glued in place without issue. With the missile body built up, I started adding the fins, after a little sanding of the base. I found that the rear fins literally snapped into the designated location on the missile body. Once all four fins were in place, I found I had a good cruciform shape with little adjustment required. The forward control fins fit well in their designated holes but required more adjustment of alignment. With the missile together, I added the one PE detail to the missile rail. All together it was a short amount of time at the work bench to complete assembly.

Decaling went pretty quickly, but you need patience working with very small decals. Fortunately, Eduard provides spares for most of the markings. I found them easy to use and they settled down over the details with Micro-Sol. I finished by over-coating the decals with Future. Lastly, I coated the seeker head with Tamiya Smoke.

I have built a number of resin weapons by several manufacturers including Eduard. This set was by far the best experience. I can enthusiastically recommend this set if you are in the market for aftermarket Soviet era weapons.