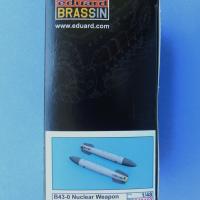 Serving the U.S. military between 1959 and 1991, these were the weapons that would have been carried by our strike aircraft in the event of a nuclear conflict. This new release from Eduard will allow for a unique loading of any aircraft that served during the Cold War in nearly any branch of the service as well as by some NATO allies. Construction of the bombs is clear and anyone with limited experience with resin and brass will be able to put these to use.

Capable of being carried on any aircraft certified for bombing loads, the Air Force, Navy, and Marine Corps all stocked these weapons. This release is part of the Mod 1 variant while item 648460 is part of the Mod 2 variant. The weapons weighed between 2061 and 2116 pounds with variable yields of 70 kilotons up to 1 megaton. The first mod was 18 inches in diameter with a length of 12.5 feet. Fuzing options included airburst, ground burst, free fall, contact, or laydown, and could be dropped from as little as 300 feet.

Upon opening the box for this set you will find everything to assemble two weapons with the body, nosecone, lugs, tail boxes, and tail fins being cast in resin and tail bands and end caps being included on a small photoetched brass sheet. Eduard provides their typical color instructions that includes two painting options and there is a small sheet of decals.

I had no issues assembling my examples with my favorite CA glue. I decided to go with the white paint scheme as I saw this most frequently in photos. Using Stynylrez White, I painted the finished assemblies and then used Alclad Aqua Gloss before and after adding the decals. Vallejo Red and Steel were the only additional colors needed.

My biggest hit is simply seeing this release as I will absolutely load up something that served on one of my aircraft carriers with these weapons. Fit was exceptional, the decals went down with Micro Set and Micro Sol without issue, and the moldings are up to Eduard’s usual high standards. I had no misses with this release.

I would like to thank the folks at Eduard for graciously providing this set to the IPMS-USA for review and to John Noack for allowing me to receive this set. I would also send kudos out to the assistants in the Review Corps for the great job they do in keeping the Corps running strong and as always, my appreciation to anyone who takes the time to read my comments.

B43-0 tail to tail
Previous Next