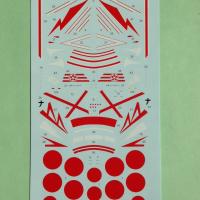 This sheet is the third of three limited edition sheets produced by Lifelike Decals for the Hasegawa 1/72 Ki-27 Fighter (codenamed “Nate” by the Allies). The sheet provides markings for seven different aircraft from the Japanese Army. The set includes color side views of all seven aircraft illustrating left side markings and overhead views showing the wing markings of the various aircraft.

Six of the aircraft are overall light grey and one is dark green over light grey. Each aircraft has very distinctive markings that will provide you with an interesting choice of which to use. As with the first two sheets, the aircraft depicted are from a wide variety of units and several are directly associated with specific pilots as noted in the instructions. Inside the instructions, Lifelike provides a summary description of each aircraft, including any particular pilot that the aircraft was associated with. The descriptions also include references to published photographs of the aircraft and as with the first two sheets, there is a listing of the materials referenced at the end of the descriptions.

The colors side views are very helpful in decal placement as each decal is numbered and the numbers are shown on the instructions pointing where the decal is applied. As with the first sheet, this set only provides the main markings for each aircraft, but no stencils, so you will need to dig into your decal stash to find some appropriate stencils if you want to go beyond the decals provided.

As I received all three sheets at the same time for review and I only had one Ki-27 kit, I initially had a hard time deciding which aircraft to build. However, in reading the descriptions, I discovered that one of the aircraft was from the 47th Sentai 2nd Chutai at Chofu Air Base in Japan. In the late 1960’s my father was transferred to Japan and the Air Force housing base we lived on bordered Chofu Air Base, and many of the base facilities were actually located on Chofu Air Base. Since I had very fond memories of the three years we lived in Japan, I simply had to model this aircraft!

The decals are well printed, on register and very thin. The decals react extremely well to MicroSet and MicroSol, nestling down over the raised panel lines and looking like they were painted on.

As with the first two sheets, the instructions do not include any color callouts anywhere to assist in determining the correct colors to paint the aircraft. I took a leap of faith and used Tamiya Japanese Army colors, on the assumption that they would have the inside scoop on the colors, and I was very pleased with the results. Depending on how finicky you are with your colors, you may, or may not, want to do a little research on your own to determine just what colors to use.

This is a great sheet and includes enough Hinomarus for two models. Other than the initial decision process of which aircraft to model, I really enjoyed this set and now have a model that gives me a personal connection to history that I did not know was there.

I highly recommend the sheet to anyone with an interest in World War II Japanese Army aircraft.

Thank you to Lifelike Decals for the review sample and to IPMS-USA for the opportunity to review it.