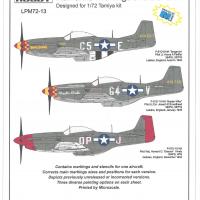 LPS Hobby has been producing many decal sheets of previously unavailable markings, previously incorrect markings and some unusual markings. This particular sheet is no exception. This sheet provides markings for three camouflaged P-51’s which were over-painted with what is believed to be RAF Dark Green and Medium Sea Gray. The decal sheet is printed by Microscale and is in perfect register.

The reason I chose the latter was because the under surfaces were left in natural metal, plus I love the red nose and tail. It also gave me good reason to get out one of my Tamiya Mustangs and have a go at it.

I used Gunze RAF Dark Green and Alclad Aluminum to finish the model and clear coated the green with Tamiya X-22 Clear to prep for the decals. In the process of applying the decals, my experience was unlike any other I have ever had with decals printed by Microscale. Some of them laid down perfectly, yet others gave me fits. It was primarily the multi-colored ones, such as the fuselage codes and National insignia. I used Microsol and Microset, Mr. Mark Softer and Solvaset, and had mixed results. In several instances, I had to use my hobby knife to slice the decals on panel lines to get them to lie down. Some of the decals were very difficult to move, once I laid them down on the model. Others slid into place easily. But, the end result was very nice and I’m quite pleased.

I would like to thank LPS Hobby and IPMS/USA for the review samples.

Decals on model.
Previous Next