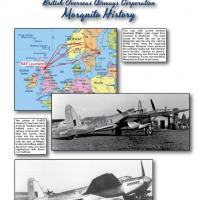 Fundekals is a newer company but the people behind them have been around the modeling scene for years. And they have a new business model. They are aware of the cost of decals and the current trend to have dozens of markings. They have decided on (mostly) one set of markings per sheet and a onetime printing and generally will not include things like national markings. And they do not include the instructions sheets which are downloadable from their web site in PDF form. And, that’s a good thing which you will see in a minute.

The subject of this sheet is the Mosquito PR.IV which had regular flights between Scotland and Stockholm between 1943 and 1945. This was a dangerous flight as it went over occupied Norway. The British Overseas Airways Corporation (BOAC) started running these flights with a single modified Mosquito eventually acquiring six more. This decals sheet represents the first plane, G-AGFV, during its entire career.

Looking inside the package, you get one decal sheet (10” x 8”) which contains the primary markings. A second sheet (8” x 2.5”) contains bottom markings for the same plane with a different paint scheme. The decals are in spectacular register and with the very thing outlines around the markings, this is great to see. I downloaded the instructions and here is where I think Fundekals shine. While most manufacturers have to consider cost and size when doing their instructions, Fundekals does not have a PDF file. The sheet is seven full color pages. It includes all the locations for markings as most sheets will but this goes several steps further. There are full pictures of the actual planes, modifications needed to make the plane accurate including multiple shots of the engine modifications. Color and markings are detailed. By not being restricted by cost and printing sizes, you get a much more detailed set of instructions.

In summary, superb subject and research along with explicit details to convert and mark a kit and some of the best instructions around, this set is a winner. Highly recommended.

My thanks to Fundekals and IPMS/USA for the opportunity to review this set. Check out their web site at the link above.