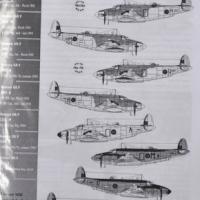 Aviaeology’s Venturas in Canada 3 provides complete decal markings for eight individual late-production Ventura GR.Vs in Royal Canadian Air Force, Western Air Command service in the last two years of WWII. An 8-page black & white documentation/instruction booklet is supplied in the set describing the subjects in great detail and providing painting and decal application instructions based on photographs of the actual aircraft. It’s worth noting that several of the Venturas in this set were featured on the silver screen during the filming of the movie Son of Lassie at RCAF Station Patricia Bay in 1944.

Documentation includes markings placement and painting instructions for all subject aircraft, plus a good number of reference photographs. A detailed article on the two schemes worn on Western Air Command's Ventura fleet is included, in addition to illustrated coverage of the in-service nose modifications (made to prevent damage for nose gun firing concussion), the combination marker-range aerial fitted beneath the bomb bay, and the SCR-729A Rebecca III system used on the two Met aircraft that are featured in the set. The overall package is laced throughout with modeler-friendly notes and details related to each individual aircraft.

The eight aircraft covered in this set:

The black and white documentation packaged in this set provides detailed profiles of all the aircraft plus specific information about painting and accurately weathering each of the planes. Very little is left to the imagination.

Aviaeology sells their decal sets through their eBay store at https://www.ebay.ca/str/aviaeology. When a decal set is purchased directly from their store, Aviaeology sends an email to the purchaser providing the documentation that accompanies the decal set in full-color PDF format. For those who purchase their Aviaeology products from a third-party vendor (such as a local hobby shop), a “chit” that is packaged with the documentation in the zip-lock pouch directs the purchaser to register their purchase/ownership with Aviaeology via email. The PDF documentation will then be provided via a return email. The PDF documentation is a valuable modeling aid. It allows the purchaser to “zoom in” on-screen, up to 800 to 1600% to see all details clearly in each of the high-resolution illustrations and print them at 1:48 scale if desired. This is a way for modelers to make sure that the orientation of the decal is correct when applied to the model. This comprehensive documentation is testimony to the high level of research by Aviaeology during the development of each of their decal sets.

Although advertised as an inventoried set, be aware that this set was screen-printed in a small run series (first production run was completed in August 2014). Aviaeology reports currently there are plenty of these sets in stock but also notes they are selling steadily so be advised they may be in limited supply at any time.

This set is highly recommended. The review sample was well printed in perfect register on thin film and the vivid colors look very accurate to me (see the photo below). Everything appears to be accurately sized to fit currently available1/48 scale Revell Ventura kits. Thanks to Aviaeology for the review sample and IPMS/USA for the opportunity to review it.