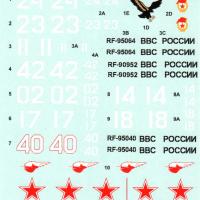 The Sukhoi Su-24 “Fencer” has been in service with the Russian air forces for over 40 years. It is a rugged, variable wing sweep bomber that is easy to fly and well-liked by the two-man crew. Several kits have been produced of this aircraft and recently, the Advanced Modeling company has released some decal sets that depict the Fencer in modern markings.

This sheet, “Chelyabinsk Eagles Pt. 1”, along with the Pt. 2 sheet, represents various Su-24 aircraft that are based at the Shagol Air Base, near the city of Chelyabinsk near the border with Kazakhstan. When the regiment was first deployed to Chelyabinsk in September of 2010, the aircraft were painted in a variety of schemes and needed repainting. Before re-paint, at least two of the aircraft featured large eagles on the right side of the nose. It was decided to keep these eagle emblems during the repaint. That is the reason behind the name of this sheet – Chelyabinsk Eagles.

This sheet contains nine different markings for Su-24s that have been based at Chelyabinsk since 2010. While similar looking, the markings included in this sheet cover Su-24s from Chelyabinsk that have participated in various special military exercises.

This decal package contains an Information Sheet and a decal sheet. The Information Sheet is in both Russian and English. The English translation is easy to understand and it is very informative. For all of these markings, the normal color profile and a color photograph of the subject airplane is included so that modelers can confirm the decal placement as well as the color scheme. No plan view drawing is included but the gray and white scheme is the standard one for the Su-24M and the profile drawings and the photos allow the modeler to figure out details. Kit decals are required for the various warning markings on the airplane.

At this time, these decal sheets are available from Victory Models in the US. The Advanced Modeling web site is only in Russian at this time.

These decals are well printed and easy to use. Note, an additional separate eagle decal is provided. The one printed on the main sheet has a minor error. Advanced Modeling feel strongly about the accuracy of the markings so they printed a second, correct eagle. In all cases, the main white ID numbers are accurate replication of the originals. 02 and 14 feature minor spaces in the 0 and the 4. This would be because a stencil was used. Also, White 40 has a fine red surround to the numbers.

I received four sets of decals from AM to review. I am building an Su-24 to test and to display one set of the decals. I have applied several at this point and am very pleased with them. They lay down smooth and follow the surface. They can be moved around readily but are very thin. The decals are strong enough with withstand some significant "handling" but thin enough to allow molded detail to be seen.

This decal sheet is highly recommended for a number of reasons. The Information sheet is thorough in it’s coverage of the aircraft which "wore" the markings on the sheet. The illustrations are clear and will be of great assistance when getting the placement of the decals correct. The price is reasonable. Thanks to Advanced Decals for making this decal sheet available and to IPMS for letting me review these great sheets.

While preparing for this write-up, I checked out Google Earth to figure out the location of Chelyabinsk. I was able to find the city as well as the nearby Shagol air base. Zooming in on the air base, I saw a dozen or so Su-24s parked alongside the main runway. Most had their wings folded. Technology is great!