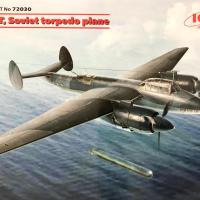 The Tupolev Tu-2, along with the Petlyakov Pe-2, are arguably two of the most eye-pleasing twin-engine attack aircraft of World War II. In 1/72 scale, the Airfix Pe-2 has been available to modelers since the 60’s. An injection-molded Tu-2 kit in this scale was finally boxed by ICM in the late 90’s.

The “T” is the torpedo-toting version of the venerable attacker, and the sprues containing the torpedoes, pylons and support struts are clean and crisp – comparable I suspect to recent ICM releases. However, the remaining sprues have to be first-mold, and are heavily draped in flash. The plastic is also very soft – similar to new Airfix kits – and the sprues gates are thick and ill-placed, like a Trumpeter kit. My review deadline for this build came and went partially because I spent an inordinate amount of time carefully cleaning parts and removing sprue nibs.  Builder be warned.

The exterior kit detail is extraordinary for 90’s molds – very fine panel lines and rivets (recessed), and some slightly raised access panels and hatches that give just enough bite for panel wash to highlight. Unfortunately, most of the rivet detail and even some of the panel lines are so light that under primer and paint they all but disappear.  For the most part, I used the rivet detail to give me guidance for black-basing the model, so that the final paint coat intimates the rivet and panel lines even if the panel wash didn’t reveal them.

Interior detail is sparse, but at least there are the extended rudder pedals and a few other details to be seen through the nose glazing and cockpit. The kit comes with 3 crew members, all of which are seemingly borrowed from other molds and none of which match. I only used the pilot and the rear gunner, as the radioman was a small blob with a few human characteristics, and no real place to fit. I always build and mount my aircraft in flight, so was happy to have the crew included, but since they weren’t really manufactured to fit this kit, I had to do serious surgery on the pilot and the seat to get him into the cockpit, including shortening his legs and shaving off most of his buttocks, and trimming the seat down to basically a post with a back.

The parts design is rather quirky. The fuselage consists of two “halves,” and then multiple panels on both the top and bottom, plus the gaps where the plexiglass sections go. Thus, the two “halves” are very flimsy with not a lot of contact points to glue together, and sparse or inadequate locator pins. I glued in sections, starting at the nose, and then once securely dry, moved to the next place where there was positive contact, and followed that pattern until I reached the tail. My concern (which played out as feared) was that this process would lead to some slight twisting of the fuselage when all secured. More on that.

Since the molds weren’t design with the torpedo attachments, there is a diagram to show you where to measure and drill locator holes for the support struts into the bottom of the wing sections. I followed the instructions carefully, and have to say that they were pretty accurate. Since there are no locator pins per se, the holes become more of a guide than anything, but useful nonetheless. Once I test fit the pylons and torpedoes with the struts in place, the fit was pretty solid.

There was some cleanup needed with the rest of the panels and seams – some scraping, filing and putty work all around. The ailerons and rudders are separate pieces so allow for some deflection if desired. The fit isn’t great, so some sanding and shaping are needed to tighten those joins. As mentioned, the fuselage ended up with a slight twist, but because of the design of the attachment of the horizontal tail piece, there wasn’t a way to shim this to level. I ended up canting the rudders slightly to keep things looking more plumb than they are, and unless you are looking for it you really don’t see it.

The gun and gun mount for the rear topside position were difficult to make work. The gun was too big (or tall) to fit in the slot of the canopy, and I originally placed the gunner’s seat too far back for both the gunner and gun to fit in the same space. I had to break off the seat and move it forward (again – no location help), and then file down the gun significantly, and it still fits only flat on the deck through the hole in the canopy.

The glass for the kit is decent, but I could find no mask set for this kit, even though the molds have been out for years and there are mask sets for other ICM kits. However, there is just enough raised brace detail that a disposable scalpel and kapton tape make pretty good work of the masking, along with some masking fluid for a couple of the circular or curved sections.

The decals are good and lay down nicely with MicroSol. The kit provides for 3 schemes and the instructions are printed in color. The instructions also indicate the aerial rigging, and they match some of the options found on resource photos of the real bird. I used Uschi van der Rosten line for this.

This build took much longer than most for me, and had its frustrations, but in the end, I am very glad to have a Tu-2 on my shelves.  Thanks to ICM for providing the kit, and for taking on a subject not covered by others in this scale.