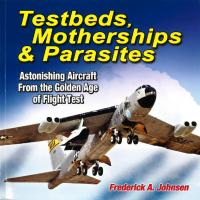 Frederick A. Johnsen recently retired from a lengthy career at the U.S. Air Force Flight Test Center and NASA's famed Dryden Flight Research Center, both located on the historic desert site known as Edwards Air Force Base. During his time there, Johnsen amassed a wealth of knowledge related to the Golden Age of Flight Test Research at Edwards. He has written numerous books about aircraft and aviation history, including: Thundering Peacemaker: The B-36 Story in Words and Pictures (1978); Bombers in Blue: PB4Y-2 Privateers and PB4Y-1 Liberators (1979); Darkly Dangerous: The Northrop P-61 Black Widow Night Fighter (1981); F4U Corsair with Rikyu Watanabe (1983); B-24 Liberator (Warbird History, 1993); Douglas A-1 Skyraider: A Photo Chronicle (1994); B-24 Liberator: Rugged But Right (1999); Lockheed C-141 Starlifter (Warbird Tech V 39, 2005); Captured Eagles: Secrets of the Luftwaffe (2014).

The cover color photograph is “Balls Eight”, the Boeing NB-52B taking off with the X-38 under its wing. The rear cover features color photographs of Republic’s XF-84H “Thunderscreech”, NASA’s Vought F-8 Crusader testbed with its supercritical wing, and the NASA’s Boeing 747 Shuttle mothership carrying Enterprise. I counted 166 black and white photographs, 92 color pictures, 4 black and white line drawings, and one black and white illustration on 204 glossy pages.

Leaning on his experience at NASA’s Dryden Flight Research Center, Frederick A. Johnsen dives into a review of aviation testbeds, parasites, and motherships with a marked focus on American and Canadian variants. He does reference a few aircraft in this category, such as Japan’s Baka and the German’s Mistel, but these are meant for reference only and do not represent the main thrust of this book. Johnsen starts off with early attempts at using balloons as a mothership to raise gliders to a proper altitude for extended flights. This preamble leads to testing at Langley, Virginia with NACA where different issues were probed like aircraft icing. The next chapter dives into parasitic aircraft like the Curtiss F9C-2 Sparrowhawk that was intended to protect the US Navy’s airships and follow through to the Tom-Tom project where two RF-84F fighters joined their mothership, a RB-36F Peacemaker, at their wingtips. The next three chapters focus on testbeds followed by five chapters on motherships. The last two chapters cover the oddball test aircraft and lead into the Appendices. The Appendices consist of two detailed tables that help organize all the aircraft covered in this volume along with an excerpt of the 1969 report on the X-15A-2. The contents include the following sections:

I have several books on Langley and Dryden test aircraft, and although there are a few tried and true photographs of the more publicized test programs in this book, I was thrilled to find many that I had not heard of before. I don’t know if there ever could be an absolute tome that would contain everything on testbeds and motherships, but Johnsen’s effort is certainly a good stab at what is currently not classified. I certainly don’t remember seeing much published on transport testbeds, and Johnsen has delivered a whole chapter. There are plenty of sharp, clear photographs, but one that caught my eye is provided below from page 41. It shows off the 20mm gun and associated radar that was installed on aB-24L, that was re-designated XB-25Q, and served as a testbed for the B-47 tail gun emplacement. As a bonus, Specialty Press and Johnsen are offering that the first 100 Orders Receive an Autographed Copy!

My thanks to Specialty Press and IPMS/USA for the chance to review this excellent book.