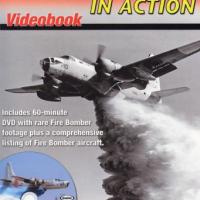 Frederick A. Johnsen has been a fire bomber enthusiast since childhood. He saw his first, a TBM Avenger, in 1961 and was hooked. Mr Johnsen has been an Air Force historian, NASA public affairs officer and is currently the director of the Air Force Flight Test Center Museum at Edwards AFB, California. He has written over 20 aviation books and articles for numerous periodicals.

The book has 5 chapters. History of Air Tankers covers the program in a general way, Order Of Battle discusses the individual aircraft used through out the years, with pictures and specs on each type. Canadian Twist covers the air tanker program in Canada. The Mechanics Of Aerial Firefighting looks at all aspects of the program from base ops to the formation of a school for tanker pilots. Chapter five is Tanker Tales: Crew Stories is the shortest chapter. All chapters are lavishly illustrated.

The DVD is a feast of “in action” footage of varying quality. It also includes an old training film and an excellent segment with an Air Tanker pilot sitting in his cockpit tanking us through a mission, from takeoff to water scoop to water drop, followed by exterior footage of such a mission. Good stuff.

If you have an interest in fire fighting aviation the is the definitive volume on the subject. For the scale modeler, the book is a treasure trove of visual inspiration and research information. I highly recommend it. You need this volume in your library.

I would like to thank Specialty Press for the review copy of this interesting, informative book.