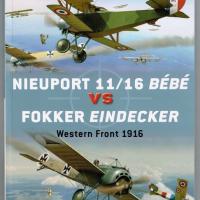 Number 59 in Osprey’s ‘Duel’ series provides a trip back in time to an era when flying machines began serving as platforms for continuing warfare above ground level. In this volume of ‘Duel’ author Jon Guttman presents the story of how exchanging rifle and revolver gunfire rapidly evolved into aerial duels between aircraft mounting machine guns. War in the air became serious business when, in the summer of 1915, the Fokker E1 appeared on the scene with a forward mounted machine gun and interrupter mechanism that permitted a pilot to aim and fire upon an enemy without concerns of shooting off his own propeller. The result of this game-changer was a period that became known as the ‘Fokker Scourge’. In an attempt to counter this technological advantage and level the playing field, the Brits introduced various pusher Scouts and the French mounted forward firing machine guns on the top wings of nimble Nieuport Scouts that fired above the propeller arc.

The Nieuports proved to be up to the job and the resulting duels between these two adversaries make for an interesting story that is aptly presented within the covers of this 80-page book. Accounts of swirling dogfights are complimented with descriptions of tactics, individual pilot histories and tallies of their ‘kills’. The text also provides a detailed look at the developmental history of these fighters into later versions of the Eindecker, with increased firepower, and evolution of the Nieuport 11 into the higher horsepower Nieuport 16. The book’s closing chapter discusses how ironically the little Nieuports, and lessons learned from their success in countering the ‘Fokker Scourge’, eventually led Germany to abandon the monoplane in favor of more agile and better armed biplanes to counter evolving generations of Allied biplane scouts.

The contents of the book include:

Nieuport 11/16 Bébé vs Fokker Eindecker is illustrated with 54 period photos, 3 color photos, a map of the battlefield and an array of colorful original art work by Jim Laurier and Mark Postlethwaite.

The book is highly recommended to anyone with an interest in the story of early war flying machines pitted against one another. My thanks to Osprey Publishing for providing the review sample and IPMS/USA for the opportunity to review it.

Typical Page B
Previous Next