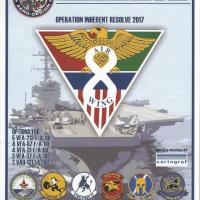 The USS George H.W. Bush is the latest aircraft carrier in the US Navy arsenal. The carrier was deployed in 2017 as the flagship of Operation Inherent Resolve. On its decks were the many variants of the F/A-18, in the guise of the C, E, and F as well as the EA-18G. Furball Aero-Design has gathered this information and provided it to the modeler.

The decals are packaged in a large ziplock. They are printed by Cartograf so you know they are world class decals. The colors are in perfect register with good color saturation. My decals were so large that I couldn’t seal them. I cut the bottom and top of the sheet to make it fit the packaging.

The decal sheets contain markings for 18 aircraft, five F/A-18Fs, eight F/A-18Es, three F/A-18Cs and two EA-18Gs. The aircraft carry markings that are both colorful and subdued. The decals are on two large sheets. One sheet is full of the colorful markings. There are a whole lot of colors and they are all crisp with first rate artistry. The second sheet is full of the black and grey markings. There is also a small correction sheet.

There are stencils for four complete aircraft.

The comprehensive instruction sheets are printed in full color on double sided 8.5 x 11. All the aircraft are shown in plan and profile view. There are six pages of instructions. There are stencil placement instructions for the legacy F/A-18C, F/A-18E/F and the EA-18G Growler. Another sheet shows what the load out would be of the different units. This alone makes the sheet valuable. There is a lot of information included on the instructions

On this particular cruise, an F/A-18E, shot down an Su-22. The markings for this airplane and the wingman are included on this sheet. The Tomcatters, Raging Bulls, Golden Warriors, and Lancers are some of the units onboard during the cruise.

The remaining aircraft are in subdued grey camouflage. The one that stands out is the Su-22 killer. Markings are included on the day of the shootdown and the days that followed.

The two EA-18G come complete with stencils for the ALQ-199 pods as well.

To say that this is a complete package is an understatement. The inclusion of both legacy Hornets, Super Hornets and Growlers makes this sheet a bargain. Stencils for four aircraft allows the model builder to have their choice of subjects. The amount of information included such as the loadouts makes this a value. This is another great decal sheet from Furball.

Thank to Furball Aero-Design and IPMS/USA for the review copy. You can obtain yours by contacting them at https://www.furballaero-design.com or at your local hobby shop or online retailer.