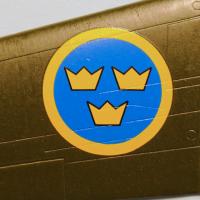 Flying Colors Aerodecals has updated their 1/72 Swedish National Insignia sheet for the recent explosion in Swedish aircraft from Tarangus (Saab Tunnan), Special Hobby (J 9, J 28, J J 21 and J 21R), and Airfix (J 8 Gladiator, J 26 Mustang, J 28 Vampire, and S 31 Spitfire). See the table, below for what it contains, but you can do anything from an Avro Lancaster to Hughes 300. The instructions provide a guide to insignia size for 62 different aircraft to cover your wings and fuselage. If you are in to ‘What If” or fantasy, the sky is the limit.

The Swedish national insignia for this set was essentially standardized in 1940. The sizes below correspond to the outside diameter of the insignia. Prop fighters in 1940 used primarily 960mm, 1320mm, and 1800mm insignias. The specification called for placement on the fuselage and lower wings, although there is photographic evidence that many aircraft (including the J 21A below) carried the insignia on their upper wings as well. As always, check your references. For the most part, aircraft had their national insignia painted on in the field so be aware of variances in placement from aircraft to aircraft within the same model. You can find this national insignia on Swedish military aircraft up through the Saab Gripen, although most current aircraft wear a dark grey triple-crown national insignia for the low-visibility colour scheme.

Decal register is perfect and their opacity will cover anything underneath. Just to be sure, white background decals are provided for the smallest set, 215mm. The decals, printed by Cartograf, are glossy and there is essentially no carrier film present. The instructions advise that Micro/Superscale decal solution can be used. I used Solvaset and had no issues.

The colours of the triple-crown have varied quite a bit in kit decals over the years, but there seems to have been a new standard over the last year or so, and this set reflects that. This new recipe, uses a color standard (Pantone) scale to define the color space for printing, and is considered a good ‘average’ of the colors actually on the aircraft. Of course there are going to be variables in different lighting, the effect of weathering, not to mention the paints used, but the current recipe appears to my eye to be an excellent starting point. I’ve included scans of a few older decal sheets that this new set would provide excellent replacements for.

First off is the Dujin DA72277 Saab 202 decal sheet with its use of pale yellow against a garish greenish-blue. The next step is exhibited by the Airfix 03015 37 Viggen sheet where the pale yellow is matched against a blue with less green in it, but still cringe-worthy. Recently, Special Hobby released their SH72215 J 21A with a light yellow against a darker blue that in mind is still is a bit off. The Special Hobby sequel kit (SH72246) being the jet version of the twin boom fighter, the J 21R, matches the current recipe of a darker yellow against blue.

I used a 1320 mm on the upper wing of a Special Hobby J 21A for my test example. The upper wing was painted in Swedish dark green before applying a coat of Future acrylic. The decal separated from the backing sheet fairly quickly and laid down well. The decal was strong enough to be pushed around on the wing without breaking apart. I used multiple applications of Solvaset to snuggle the decal down over the inscribed surface of the upper wing and I am very happy with the result.

This is another great sheet from Flying Colors Aerodecals. Highly Recommended!

My thanks to Flying Colors Aerodecals and IPMS/USA for the chance to review these great decals.