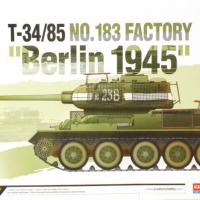 No one needs to remind the typical armor modeler of the significance of the Russian T-34 in the development of modern armor. I have at least twenty variants of this machine in my own collection, and have been fascinated with this vehicle ever since Tamiya released the very first decent versions back in the 1970’s.

This latest addition to the T-34 inventory comes from Academy models, and is a T-35/85 specific to the last-stage battles of World War 2 that took place within the confines of the German capital immediately before capitulation. At that point, even twelve-year-old Hitler Youth were being armed with the cheap and effective panzerfaust, and being sent up to the front lines often with nothing more than a solitary single-shot weapon. But they were effective enough to create some consternation among the Soviet armored columns driving into the heart of the city.

Academy’s latest version of this kit features what has been often mis-coined “bedstead armor.” Supposedly Soviet troops soldered old bedsteads onto their tanks to serve as stand-off armor against the panzerfausts raining down on them during the nightmarish house-to-house clashes. When I first opened the box and examined the photoetch provided, I was a bit taken aback as the open mesh plates didn’t look much like bedsteads to me. However, a quick peruse through the internet showed that Academy got the armor details exactly right. It’s definitely ad hoc armor taken from some unidentified source, but bedsteads it is not.

I began assembly with the basic plastic model hull, which is well detailed, including the underside. The bottom is assembled with separate walls, and some care must be taken to ensure the sides are even with the bottom plate, otherwise structural problems can crop up later. The running gear is very basic (as is the real tank itself). The tracks are suitable link-and-length and some very slight droops on the top nicely replicates the real track runs. Only the standard solid wheels are provided in the kit. If I’d been doing this model strictly for my own collection, I might have added a spiderweb wheel or two from my spares to add a bit of interest. However, the pictures of the Berlin T-34s on the internet do seem to show mostly standard wheels, so I can’t fault Academy for the lack. A nice option is included for depicting the rear engine mesh either with solid plastic or a very nicely done photoetch grill. I encountered no difficulties with the hull assembly, but be sure and drill out the necessary holes before closing things up. I was surprised that indentations were provided for mounting the various hand rails, as these were quite variable on the real vehicles. Still, if needed, it wouldn’t be much of a job to fill these in if necessary.

The turret shell went together surprisingly well for a multi-piece item, and very little filler was needed to clean things up. However in my opinion at least, Academy went a bit overboard with the cast metal look, and I sanded mine slightly to tone it down. The only real problem I encountered here was with the mounting of the smaller of the two command cupolas. Academy provides two curved shims to hold it in position, but even with the best adjustment possible this leaves fine gaps along the sides. It would have been easy for them to have simply provided a single ring to insert, but I fixed the issue to my satisfaction by adding two curved bits of Evergreen strip to complete the ring myself. Speaking of which, the cupola is really nicely detailed with periscopes inside and out. The only other filler needed was for the inevitable pin marks on the inside of the hatches. Other than these issues, I encountered no difficulty with the turret assembly.

The trick on this kit, of course, is all the photoetch mesh armor, and that’s where my lack of comfort with photoetch came into play. All of the turret armor as well as the armor over the rear engine grill require making fine folds in the etch in long stretches, which is a bit difficult to do with most hand tools. If you have one of those fancy photoetch folding tools, this is where it might come in handy. I did the best I could, but cannot say that mine came out as neatly as I would have liked. On the other hand, these ARE improvised armor so a bit of variation can pass muster. As you will need to paint and decal the surface of the model, it’s best to leave these off until done with that stage. I assembled my kit with just the mesh supports on, and even then it was a bit tricky to paint and weather the vehicle without popping these off occasionally. When doing the final installation of the mesh itself, you may want to do a bit of test fitting to ensure that the hull armor doesn’t foul the turret armor.

In order to complete this review I finished my model in a fairly “clean” state without a lot of wear and tear. However, once done with the review I’ll probably add some additional tools and other clutter as well as maybe bending a fender or two. These things took a lot of punishment, after all.

Needless to say, I’m extremely pleased with the end result. The spaced armor really makes for a distinctive version of this old monster and I can hardly wait to plop it into a street fighting scene. Fascinating!

My thanks to MRC, Academy and to IPMS/USA for a chance to add this charmer to my collection.

Great Work, Congratulations!  What colors did you use to paint the photoechted grills?